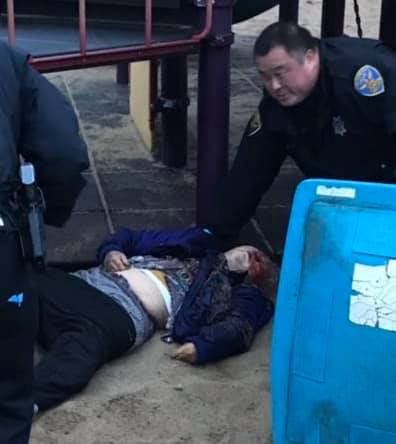 A 90-year-old grandmother is in a hospital bed right now fighting for her life. As I understand it, her home was broken into and when the burglar didn’t find anything of value, they decided to take out their frustrations on this defenseless, elderly woman.

Ladies and gentlemen, it takes a special kind of demented evil to inflict harm on a woman who is 90 years old. She was beaten really badly, and why? The only thing I can think of here is pure evil. Part of me wonders if the person could be mentally ill in order to do something like this, but you know what? I don’t care, I don’t care. If you are capable of doing something like this, then you do not belong free among regular society. Obviously they have enough wits to know that breaking into someone’s home can yield some financial gain, so they can’t be that incoherent.

I really hope that the police find this guy or guys, I’m not sure how many assailants there were. One of my friends was worried that mentioning race could create an uproar or get him called racist. That’s bullshit, when describing the assailant, you are simply stating the facts. In this case, the victim was an elderly Asian grandma, and the criminal was (at least one of them) a young, skinny, tall Black male. Stating that fact doesn’t make you a racist, it’s just a fact. It’s not an attack on black people in general, it’s a statement of fact.

He’s a piece of shit and I wouldn’t shed a tear if he got crushed to death by a falling piano. A person who could commit such a heinous, senseless crime should not be among civilized people. Not now, not 10 years later after serving a jail term, never.