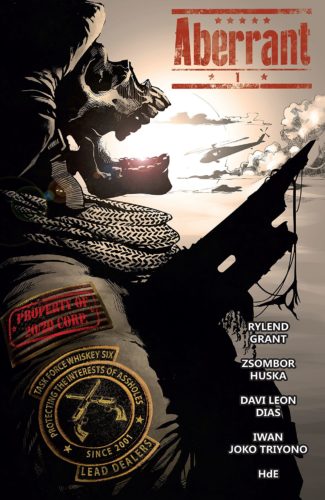 Some months ago I purchased an iPad to read comics. Since then I have been reading all sorts of comics. The main catalyst for this was the Marvel comic films. I’ve always wanted to know the complete stories behind all these really cool films, but I wasn’t into comics. I’ve always preferred reading novels. However, I realized that if I wanted the stories, I’d have to embrace comic books. And boy did I ever embrace comic books!

So yes, I love comics and I have been reading a bunch of them. The latest one that I finished was a random one that I picked up from Action Lab Comics called “Aberrant.” Without putting out any major spoilers, this series has to do with humans who have been enhanced through some sort of genetic experimentation. The story follows some soldiers and all these things come into play.

Without dropping spoilers, I can’t tell you the whole story, but there is the typical good guy versus big, powerful bad company scenario here. After reading Volume one and two, I definitely enjoyed it. But I must forewarn you, that ending felt really cheap and rushed. They could have done way better than that. It wasn’t as bad as Game of Thrones’ ending, but I wasn’t as invested as I was in GOT. But it was definitely a bit of a letdown.

That ending of the second volume aside, the comic overall was a pretty good read. I do hope that they make up for the letdown in future series. This was totally worth a read though, I dig it.