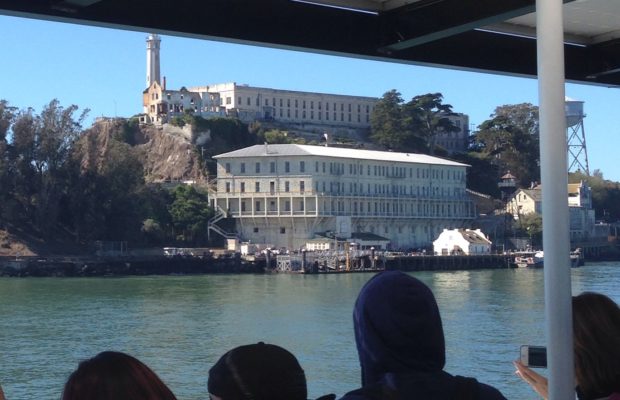 The Alcatraz tours festivities begin with standing for sometime on a very long line. Afterwords they lead you down a path and get you to take a picture. (Say cheese) You then board the boat which takes you to the island. On a side note, as the ship docked, I saw one of the most bizarre acts by animals that I have ever seen in my life. Check this out!

So there were a bunch of Sea Gulls flying, they circled together in the sky, maybe 30 of them. Together, flying perfectly in sync. At one point I hear one of them go “caw,” then another, and another, soon they are all cawing. It’s like a battle cry, they are all cawing in harmony, and flying together directly towards the bunch of tourists waiting for the boat. As we all observe, these birds begin to drop poop bombs on the tourist. All of them at the same exact time. It was absolutely insane! This was a planned, military style, bombing attack by these birds! As we all watched, everyone on the boat simultaneously screamed “Oooohhhh…” This was insane! This place was actually pretty fun. I know that it’s weird to find “fun” in a place that was probably the cause of much pain and dread for many. However the tour, the experience, was pretty amazing on many levels.

Let me give you a standout example. At one point I stepped into “the hole,” solitary confinement. When I walked into that room, I felt terror take a hold of me. My heart raced, and I began to feel a strong panic. I’ve never been to prison, and God willing I will never, ever get closer than I did during this tour! However, I can say that if those bars were closed after I went in, followed by that second outside door, that tiny, completely dark room could drive a man insane. Prison regulations stated that they needed to keep a light on in there, but according to the audio tour guide, they did not. I can’t imagine how terrifying that experience could be.

During our tour, there was a man signing a book. His claim to fame was that he was a former prisoner in Alcatraz. My wife asked me to take a picture with him, but I couldn’t. See, I equate his being there to a George Zimmerman participating in a boxing match on television. There are some things you don’t celebrate or worship. I’m not going to get political here, but this guy’s claim to fame is that he was a criminal. I mean, seriously? No, I’m not interested. I’d read the book, out of curiosity, but I’m not particularly interested in taking a picture as if this guy were someone to be regarded with some form of reverence. Present me with one of the veteran that was in Alcatraz during their military service, and there is a man who’s hand I’d like to shake.

I mentioned before, the tour is an audio tour, you are provided with a pair of headphones and a little device which guides you on where to go while detailing what you are seeing. This was surprisingly very informative and quite fun. I learned quite a good deal. The main narrator sounded like Gunnery Sgt Hartman from Full Metal Jacket, that was pretty cool. Going throughout Alcatraz requires a good deal of walking on hills, and going up and down stairs. For those of you that cannot make it up the equivalent distance of 13 stories, they provide a mobility tram up the hills, but once up there, you gotta take the stairs yourself homeboy!

This tour was one of the most informative and interesting I have ever done, I totally recommend taking this one if you go out to San Francisco. Make sure you eat before hand as they don’t allow or provide any food in there. They do allow water bottles though. Don’t let the fact that this is a prison fool you, there are some breathtaking views of San Francisco from here, it is a great tour, and totally worth taking!

Please take note of the date on a post. Over the years my views have evolved. I'm constantly learning and growing.
Related Items
← Previous Story After Osha – Quickie Review
Next Story → Aquarium of the bay – Quickie Review
Subscribe
2 Comments
Oldest
Newest Most Voted
Inline Feedbacks
View all comments

[…] my wife and I walked along Fisherman’s Wharf after our Alcatraz trip, we saw an advertisement for Otters at the Aquarium of the bay. We both thought it would be awesome […]