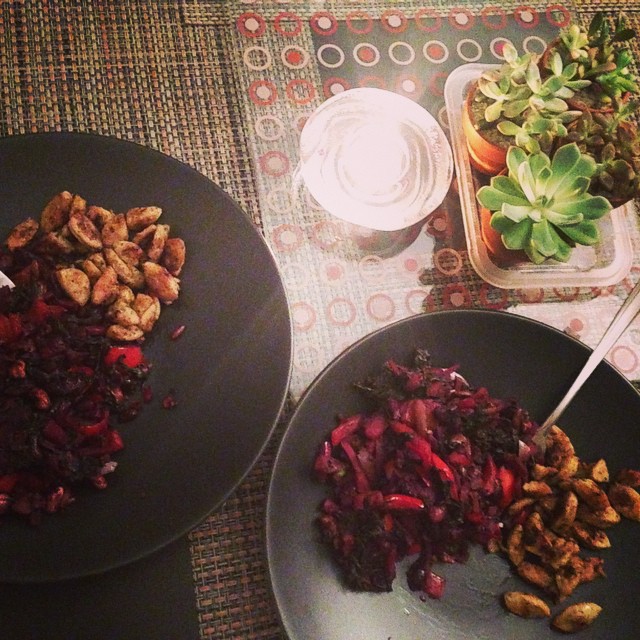 Wrong! Very wrong. So I am doing this calorie cutting cleanse of sorts. Basically I’m trying to win $10,000 while simultaneously getting my health back. Everybody wins. Part of my initial plan was to juice for a week and flush out all the garbage I have accumulated over the past few weeks. Since my dad was ill, and after he passed away I have been abusing my body. I have one of those self destructive personalities that overeats for comfort when I’m upset. So for several weeks now I have cut back on the gym, and stepped up the terrible eating. It has to stop.

In any case, I decided that I wanted to cook a kale and spinach based dinner for me and my wife last night. So I cut up the vegetables, kale, spinach, red peppers, and then I decided to get creative. I’ve been on tv, and I have been coached by celebrity chefs on how to make cool stuff, so why not try? Again, wrong. So I decided to take a bunch of dried cranberries, blueberries, blackberries and raspberries, I crushed them in my hands and threw them into a pan. The plan was to make a delicious sauce from these low glycemic ingredients to use as dressing for the food. However, I decided to add more, and I brought out some kiwis, apples, and pears. I cut them up like tiny fries and added them to the mix. Even more, I added some pine nuts and cashews for that crispy professional flare. Sounds like a decent idea right? Wrong. I put so much sweet stuff in this dish that neither my wife my I could eat it. It was just way too sweet, it would appear that I used far too many sugary items. I think I miscalculated because as I tasted the kale it was terribly bitter. As such I went overboard with the sweetness. Dig Inn does a similar dish, and I was hoping to emulate it, but that didn’t work out. I had to cut up a few pieces of chicken, and get more kale and spinach to attempt to dilute the sweet flavor a bit. We were able to eat some it that way, but had to discard the remainder, it was just too much in way of sweetness. But hey, I tried. Some would say that it is the thought that counts. If that’s the case, I am doing ok. Thing is that I wanted to treat the lady to a nice dinner, not diabetes!