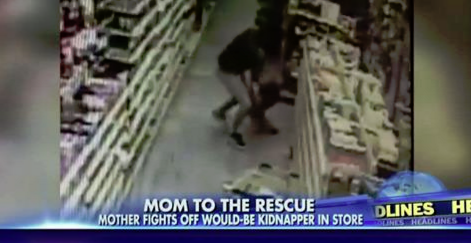 So some psychopath attempted to kidnap a 13 year old girl, and the mother wasn’t having it. She fought him off and saved her daughter. Then, an off duty cop caught the jerk outside. He’s been arrested and will hopefully be put away for a long time.

Psychopaths like this man have always existed, since the beginning of time. I saved a woman from being kidnapped and raped myself years ago, before I ever knew the name Obama. However, that doesn’t make any difference to the people who hate President Obama. You see, I have already seen dozens of posts blaming President Obama for the attempted kidnapping. They said how this is all because of Obama’s administration, and the laws he has allowed to come to pass.

Seriously? You are blaming President Obama for the actions of a psychopath in a supermarket? Seriously? I mean, let’s stop and think about this for a moment. How do any bathroom laws affect what happened there? How does gay equality in any way shape or form affect that? How does pushing for common sense gun reform have any effect on that? Immigration? What exactly did Obama do to make this possible? Can you not see how ridiculous that accusation is?

As if kidnappings are some sort of new development? Look, when President Obama is wrong, I have no problem going in on him! I have already done so many times over and over, but when something is unfair, such as blaming him for an attempted kidnapping, then you leave me no choice but to speak out on his behalf. Seriously? Are you folks that biased, that far gone that you blame him for this? Y’all is on some serious bull bull! Trifling!