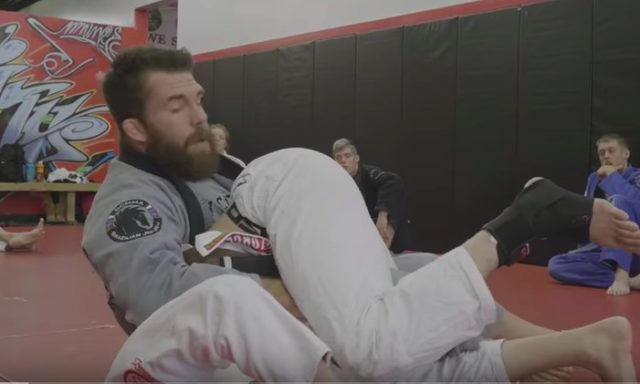 Sometime ago I came to a major realization in Brazilian Jiujitsu regarding attempting back submissions. I realized that working from the back doesn’t just mean sweeping or trying to transition back to the top position.  Historically, I had decided to start working from my back, but even then I think my approach was short sighted. When I’ve worked from the back I was focused on regaining the top position. The realization I came to was that I could work submissions from there instead of trying to regain top position.

Today I’m happy to report that as I rolled last night, instead of simply trying to sweep my training partner and getting to top position, I actually attempted to submit someone from the back. I found myself reaching for the collar and trying to get a choke. I found myself trying to trap an arm to go for an armbar. I even tried to get a kimura from my back. I’ve never, ever tried to get a kimura from my back. I wasn’t successful, but I tried and I threatened. This is very new for me. I realized that I have a lot of work to do on that, but the breakthrough is that it actually occurred to me to try and submit from the back! That’s monumental for a smasher like me!

In this case, my back kimura attempts led to a sweep which then led to a mounted submission. I wasn’t even trying to get top position as I had plenty of opportunities to sweep, I was trying to submit from the back. Instead of sweeping, I coached my newish partner on how to stop me from sweeping him. I pointed out the openings I’d take and told him what to do to close those openings. Interestingly, using a back submission attempt led me to gain top position anyway and gave me the opportunity to submit from the top. At that point I just decided to take it and finish it.

In training some people have said “Just take what they give you!” This is primarily something I’ve heard from “smaller” and “weaker” individuals who roll with huge beasts. Recently, I was speaking with one of our female members, she’s very fit and strong, but fairly petite compared to some of the savages she trains with. With that being said, I was watching her work and she was amazing on the mat. Afterwords we chatted a bit and she told me “I can’t overpower them. I can’t force their arm out through brute strength because they are stronger than I am. However, if they make a mistake and put it out there for me, then I’ll take it. I play a defensive game and wait for mistakes, this is how I HAVE to play.”

Yesterday, whether intentionally or not, I got a taste of how playing defensively works. This opened up the submission attempt which took me from a defensive position to one where I could become offensive. It’s pretty fascinating stuff really. BJJ is like a chess game, a human body puzzle, and though I’m fairly new, I can appreciate the massive expansiveness of this thing. I also observe how even the very best of the best constantly speak about how much room there is to learn and grow in this game. It truly is quite fascinating.