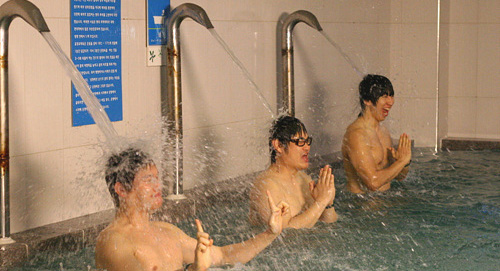 I was getting a massage from my male masseuse. I suppose I was half asleep cause I thought he was talking to me from one side, but he was on the other. In any case, at one point I decided to stretch my arms out and I hit something. I didn’t think there was anything on my side so I started reaching and squeezing trying to figure it out. That’s when my massage therapist said, “That’s my leg.”

I quickly retracted my hand and was like “Oh crap bro, I thought you were on the other side, my bad.” He said he was so relieved cause he thought he was going to have to kick me out for trying to hit on him. LOL. I told him not to worry at all, no offense, but I’m not into dudes. That squeeze was a straight up, honest mistake.

He once again expressed relief and then we went back to the massage. That experience was funny and embarrassing at the same time. For the record, if I ever touch a male, that was either platonic or by mistake. I am not in any way, shape or form attracted to men so don’t worry if I accidentally rub your leg. I’m not hitting on you, you can rest assured of that.

Please take note of the date on a post. Over the years my views have evolved. I'm constantly learning and growing.
Related Items
← Previous Story Expressing Gratitude: That time she made spaghetti
Next Story → Riding the train during corona virus times
Subscribe
0 Comments
Inline Feedbacks
View all comments