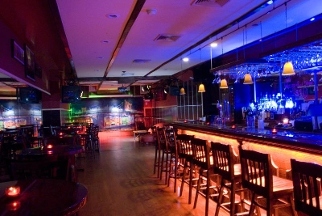 A few days ago I received an invitation from comedian singer I’Wante to come see him perform at a talent showcase.  I decided to come out to Brooklyn Nights to check him out and to see the acts at the showcase. It was a big night for performers because G-Unit’s own talent scout Kevin Weekes was present to judge the musical talent in a contest.  Everyone was eager to strut their stuff on this evening. Unfortunately it was a set showcase, so I couldn’t perform here. I came not as a performer, but wearing two other hats, one was as I’Wante supporter, the other was as NYCTalking writer.

We had to wait outside for sometime before being allowed in as they set things up. Eventually we were invited in, now if you know me, you know that I carry a work multi-tool with me everywhere I go. It’s a Leatherman that has many different attachments, quite useful in a pinch really. The issue is that one of the attachments is a nice little blade. This presented a problem as we were being frisked down at the door for guns and knives. I spoke with the bouncer before he searched me and told him I had a tool with a knife attachment in my pocket and that I didn’t want to discard it.  We worked it out where he would hold the tool for me while I was inside and return it to me when I left. That went over rather smoothly thankfully.

The venue itself is quite nice. I went after work so I needed to eat soon after arriving.  They have quite an extensive menu ranging from typical bar/lounge fair to more exotic items like “crab cakes”. Now, I don’t know about you guys, but I’m not too eager to try crab cakes from a bar.  I only have seafood and items like that from high end reputable places. Too risky in my view, although admittedly I could be missing out on a great crab cake.

I decided to play it safe and had a hamburger with fries. The hero for me in this dish were the fries, they were thick cut, not greasy or burnt, and nice and “potatoey” in the middle. Is that even a word?  Look, bottom line the fries were good!  The burger was “ok”, nothing outstanding on this one.  It wasn’t a bad burger, I’m not saying that, but it wasn’t a burger that blew my mind like the ones my wife made at home last night or the burger you get at Neirs in Woodhaven!  For a drink I had a sprite, and that was pretty much water with a little sugar, pretty gross drink. The cool thing in regards to that is that when you pay the $20 cover to enter at this event they provide you a little ticket that is valued at $10 towards a drink or meal.

The event was entertaining, there were a lot of performers doing their thing.  Myself and I’Wante left shortly at 11pm, and up until that point my favorite performer was this guy called G-Bango or something like that. He continued to call out “RNT” as he performed, he was in the lead followed by a gentleman named Shogun in close second place. They had the best beats and in my opinion the best songs up until then.  I’Wante did his thing as a singing comedian, though this crowd, judging by the reaction was a little more hardcore. Look people “Slap a b*tch” is a joke! He isn’t really going to slap anyone!  During the show, when asked by the hostess, Kevin Weekes stated that he wasn’t too impressed with what he was seeing. At least up until the point before I left, he could have changed his mind after we were already gone.

I was sitting next to the speakers during the musical part of the show, and that was rather painful, it was very, very loud. Next time I will better station myself on the floor. I look forward to performing here one day, it’s as real and tough a crowd as it gets. It would make a great test for my talent and my work. Overall the event was a very good time, I had fun.

Please note that this place is right by some projects, so just be aware of that if you don’t have “street” wits about you. I thought I was going to a hipster polluted area seeing as though it’s roughly in the same area, but that assumption was WRONG! The Classon Avenue stop on the G train leaves you right smack dab in the middle of some projects. If you get off at the Bedford/Nostrand avenue stop you can avoid walking through the project area to a degree and it’s probably a safer route. Look, I’m not trying to be offensive to folks from the projects, I’ve been there myself, but let’s be real here.  If you are a stranger walking through some unknown housing projects, that could be asking for trouble. Let’s be real here, I know when I was growing up we were always suspect of anyone that wasn’t from our block, or our projects walking through our hood. Especially one that looks the way I look, feel me?

It certainly didn’t help that my buddy I’Wante told me (jokingly I later learned) that this was some sort of reception. So I actually wore a nice button down work shirt, combed my hair and made my appearance somewhat formal. LOL. Again, wrong, wrong, wrong! I was in a place where everyone wore jeans, jerseys, baseball caps, Jason Voorhees masks, etc.  While I was walking past the projects I had comments screamed at my direction, “fool looks lost”, people staring at me, someone even walked next to me and asked me if I was a cop. LOL. Good times friends, good times.

Don’t let this discourage you from visiting the spot though, it’s a good time and worth the trek out into Brooklyn. If you are a rapper, and you can hold your own here, then you are headed down the right path.

Bro this was awesome! I love your writing and you have such a great memory.

I try to take mental notes as things happen. Some of my friends that write are so much more detailed and amazing in their writing style. I’m just trying to make it to their level.

dude you are greater than you know.