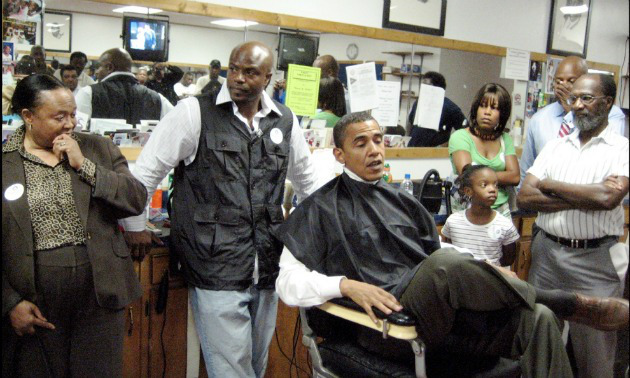 This weekend I went to a new barber shop with my son. The first thing that happened is that I couldn’t get the front door open, and once I did, I came in with my big mouth a blazing!

Everyone in there looked at me cause I was loud, and they also looked at me like I was some sort of idiot cause I couldn’t open the damn door. Once we walked in, the little dance began. I explained to my son that most of the people in there were waiting for a specific barber. Though there are no official schedules or appointments, there is definitely an unwritten hierarchy when it comes to you being seen.

My son was surprised, how is that? Don’t you just walk in, a barber sees you, you pay and you go? Well yes, in theory that’s the process, but in real life it’s not quite like that. For instance, a barber can skip an established client ahead of you in the queue and say, “he had an appointment.” How could you prove otherwise?

So you are betting on one of them freeing up, not having someone else waiting, one of their boys walking in, or them not taking a break, etc. When you are the outsider at an established local barbershop, it’s almost as if you are asking for acceptance, an audition of sorts. It’s bizarre really, especially since you are the paying client, but that’s how it is at these local hood spots. There is an unwritten code, my son noticed how some guys just walked in, and were seen pretty quickly. Meanwhile, I was sitting there, and waiting for someone to free up.

Eventually one dude freed up, and it seemed as though he didn’t have a queue. He didn’t invite me over, no one acknowledged me, that’s not how it goes. If you expect the traditional business protocol here, you are mistaken. So I nodded at the guy, pointed at the chair, and he nodded back. That meant it was my turn with him.

There is one more thing to consider, if they don’t have a queue, it could mean that they suck. It’s all about trial an error when trying out barbers at a new shop. This was not the case here, he was pretty good, but it’s something to note and be aware of. As with any business, the busier a person is, especially in this type of field, it usually means that they are damn good and in high demand.

Once you become a regular, you have your “guy,” you generally can call them and make an appointment, or when you walk in, greet them, and they automatically queue you up. That’s a small taste of barbershop politics. Don’t even get me started on actual discussions that go on there!