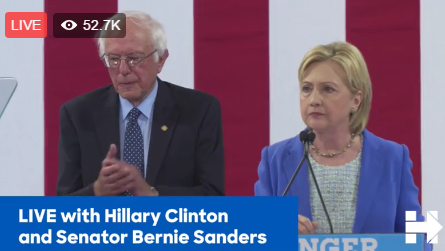 We knew that it was bound to happen, there was no other option. We knew if Hillary was the top contender on the Democratic side of the house, that Bernie would have to support her. It was either that, or basically give Trump the nod. The question now becomes, will Bernie’s supporters swing over to Hillary? Personally, I can’t stand her. I think she is a liar, a hypocrite, and about big money. She’s not one of us, she doesn’t care about us, she’s not an ally. She certainly pretends to be, but I’m not buying it. Her voice irritates me, knowing that every word she says is fake.

On the other hand, we have Trump. The tell it like it is candidate on the GOP side of things. A guy who has awakened the racist underbelly of America. A man who offers to pay the legal bills for anyone who executes violence. A guy who claims to want to make America Great Again. A very rich man who doesn’t know a damn thing about running the country. A man who can’t even keep the GOP united. A man who would likely lead us into the apocalypse because of his big mouth. A hypocrite.

The one thing I give Trump over Hillary is that at least he’s honest. He doesn’t give a damn about who he offends, and he just tells the truth. I respect that, though I don’t agree with him, or his views for the most part, I respect that at least he tells you to your face, “I don’t like you.” Hillary on the other hand smiles and pretends to care.

As much as I despise Hillary’s lies, it would seem that I have no choice here. Either I vote for her, or I vote for Trump. Not voting is not an option, because if I don’t vote, then I have no say. Though, truth be told, in a rigged game, I have no say anyway, but that’s a whole other story isn’t it?

I’m terribly disappointed that Bernie is out, but all things considered, I don’t think this could have gone any other way in terms of his current action. Bernie, I know that if anyone could have changed this country, it was you, but they were not ready. The fools who buy her lies, the fools who simply want a woman president, and the fools who fear change. They were not ready for you. On behalf of America, and the American people, I apologize to you for their stupidity. God help us all.