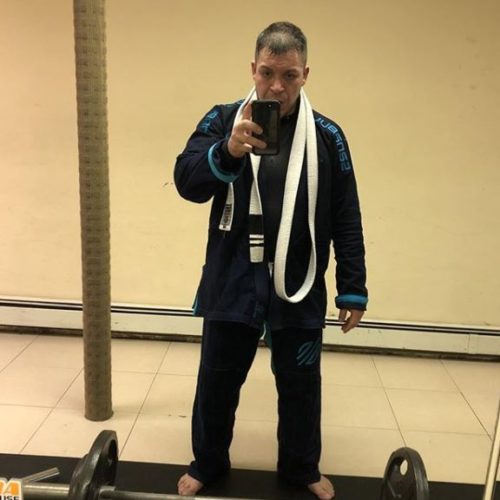 On Friday, I was on the floor rolling around with my homeboy Yuman. Professor Fred was coaching him. As we rolled around, Professor began to coach me. There was a lot of back and forth, and good effort was being made by both of us. Eventually, Professor Fred had seeing enough and he called Yuman over. He had two strips of tape ready and put them on his belt. We all clapped and congratulated him because he’s been putting in the work and we know he deserves it! Yay Yuman!

I wasn’t expecting this, but Professor Fred then called me over to him. He grabbed my belt and put a strip of tape on it. I thanked him and figured that was it, but then he put another strip of tape on my white belt. Just like my buddy Yuman, I got two stripes on this a.m after a very good rolling session. Again, I thanked our professor, I said Osu, and then we continued training.

This was an unexpected surprise, and I was grateful for it. If you guys remember, when I joined up at Una, I gave up my two stripes because I didn’t feel I deserved them after a 13 year lay off. Professor Fred agreed with us dropping them, and we started from the bottom again. I am now back to my old rank, and anything I do going forward will only take me a step further.

There is still so much to learn, but I’m super excited, and I’m starting to focus more on the journey rather than the belt. I struggled a bit at first when I gave up my stripes, but I think that this was more about pride and ego than anything else. My ego told me, “You earned that, keep it.” Though reason told me, “it was over 13 years ago, it’s only two stripes, and you are thinking of looking “good,” but you ain’t shit and can’t back it up.” I did the right thing starting over, and I’m better for it as a person, and as a jiujitsu practitioner. If Professor Fred gave them to me, then he must feel I’m worthy of them, even though at times I feel I’m not. I’ll trust his judgement over my own on this.

I’m realizing that I actually love my white belt, and I’m loving the process. I know that eventually I’ll get blue, (and the pressure that comes with that) and as long as I continue training, I’ll keep rising up the ranks. But honestly, after having given up those two stripes, I’m really appreciating my white belt and the journey so much more. These things all happens for a reason, and I’m genuinely loving it even more now. I know as I learn more, and continue to grow more as a martial artist, I’ll love and appreciate the journey even more.

By the way, if you’d like to join this journey, go to Una BJJ website and look around. Professor Fred is really cool, and there is not pressure to sign up or join, etc. You can come through and try it out knowing that you will not be hounded by anyone to join. He’s really cool and I’m loving my new home.