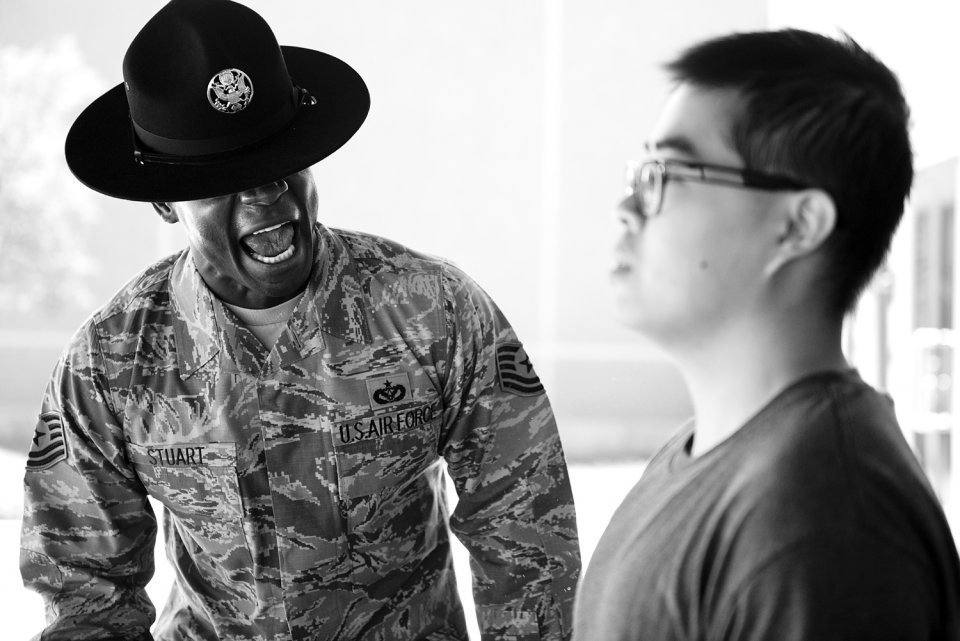 When I arrived at boot camp, everything moved in slow motion. It feels that way from the moment you enter the dorms until the day you leave. The only difference is that you begin to adapt. I went through basic about 20 years ago, but I still remember the first week.

Most of us arrived at night, and continued to filter in overnight. Every time someone new arrived, there was screaming and insanity. It continued all night and felt like a bad nightmare. You barely got any sleep, and when you started to nod off, a new recruit would arrive and you’d be woken up again. It makes you delirious after awhile.

That next morning, we were all woken up, and the training instructor continued screaming at us. He was screaming that we had to shave every morning or else. He shouted that if you shaved at night, then went to sleep,  you’d have 8 hours of facial hair growth by the morning, and then you’d fail inspections. So that first day I was shaving faster than I’ve ever shaved in my life as they were screaming and rushing us. Somehow I cut my face and my finger pretty badly and I started to bleed a lot. I ignored the pain and stinging and continued shaving.

Once he noticed, the training instructor came over to me and started to scream at me for bleeding on his sink and the floor. He insulted me for being incompetent and asked me if I was trying to commit suicide. To cover his ass, he asked me if I wanted medical attention, I screamed, “Sir, Airman Rodriguez reports as ordered: I do not wish to receive medical attention.” So he resumed screaming, then hurry up and don’t leave a single drop of blood behind! I tried to focus on shaving while keeping the blood from falling anywhere except into the running water. Eventually, the bleeding slowed and we just carried on with our day.

In terms of taking a piss or a dump, I know for sure that the first few days none of us used the toilet. Our bodies were in such shock that the need never arose. I want to say that it took me about 3-5 days before I recall ever sitting down on the toilet and taking a real dump.

Remember, they demanded that everything was spic and span clean. And using the bathroom meant that you had to walk in there after the bathroom crew had cleaned it up. If the T.I found anything out of place when they came around looking with their flashlights, even one little strand of hair, the bathroom crew would get in trouble, and then we would all get in trouble. If you were the cause of this, it was not a good thing. However, there came a point that I had to shit, and it was very late at night and I just went for it. Thankfully nothing went wrong, after that, I began to shit in the evenings while the others slept.

One of the things I found amazingly interesting is how smokers coped with boot camp. There were no individuals who got sick or exhibited any form of withdrawals. For about four weeks they went from smokers to nonsmokers. I thought that was amazing and applauded their success and new found freedom.

Sadly, nearly to a person, they all started to smoke again once we were given some freedom. It’s a damn shame that they kicked the habit, without even realizing it, and then went right back to it. Idiots. I’d bet that many of them have been trying to quit unsuccessfully since then. Such a damn shame!

The first few days or so we were still in civilian clothing, they called us a rainbow flight. Eventually they’d shave off our hair and provided us the uniform supplies. This was part of our adaption process, it started to make us feel like we belonged there. The first week or two in boot camp are the hardest for sure, but after awhile you get used to the system. I flourished in that environment. I was made an element leader, academic monitor, and house mouse. I had other shit jobs, but those were the good jobs that were given to top performers.

I made a great Airman, I followed orders and executed to a letter. I also happened to exhibit great leadership abilities, this put me in good standing everywhere I went in the military. There actually came a time where I wondered how I would live without it! I was terrified to come back to the civilian world, I wanted to stay active duty but my reserve unit would not allow it. So I returned to civilian life, and a few weeks later I was back to normal. Though it took me a long time to stop ironing my underwear and socks. True story.