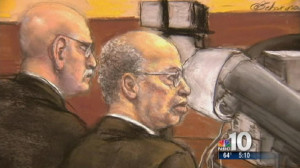 When I was younger, I saw a young Mexican kid crying. His mom was trying to comfort him, and his father went over and said “Hey, los hombres no lloran!” The kid looked at him, and tried to fight back the tears. His father looked at him sternly, and repeated “Usted deja de llorar como una nina, ahora mismo, porque lla le dije que los hombres no lloran! The kid stopped crying, and his father nodded approvingly.

Men in general are taught to be tough, hard, and not express their feelings. Generally a man who is expressive, or emotional, is looked at as “weak,” a “pussy,” or in some cases “gay.” This is reality, it may not be politically correct, but this is the truth. This is extremely true for us Latinos, the example above is not rare.

I remember some parents would say, if you get beat up, and you show up here crying, I’ll beat you up myself. You don’t cry, you fight back, and you stand up for yourself. There have been youtube videos of this posted online, and while some parents praise them for raising “men,” others consider it child abuse. Mind you, most of the ones that said things like this, were MOMS! Moms in the hood didn’t play!

As a young father, I have always tried to instill balance on my son. He has seen me cry, he has seen me show love and emotion. However, he has also seen me being strong and tough, when the situation deems it necessary. Since my dad passed away, my son has seen me crying many times, and I am not ashamed of it, I lost my father.

At times he says “Pops, I’m sorry that I don’t seem emotional. I didn’t know him.” This is true, my father did not have much of a relationship with my son, so he doesn’t feel the pain that I do. I say to him, “What I am to you, he was to me. Think, maybe 30 years from now, after all that we would have shared together, one day, I will be completely gone. That’s what I’m dealing with.”

It’s not that he doesn’t understand death, but he cannot feel for a man he didn’t know. He feels for me, but in terms of my dad, due to not having a relationship with him, he doesn’t feel anything but sympathy for me. That’s fair and understandable. My point is, that my son has seen me show emotion. He’s not the only one that has seen it either.

Though I don’t walk around showing tears to everyone, those that are close to me, have at one point or another seen me show emotion. It’s human, natural, and healthy. Men can cry, there is nothing wrong with showing emotion. Although, I would discouraging being like that intolerable opera guy Hoffman, now that guy was a biznatch!