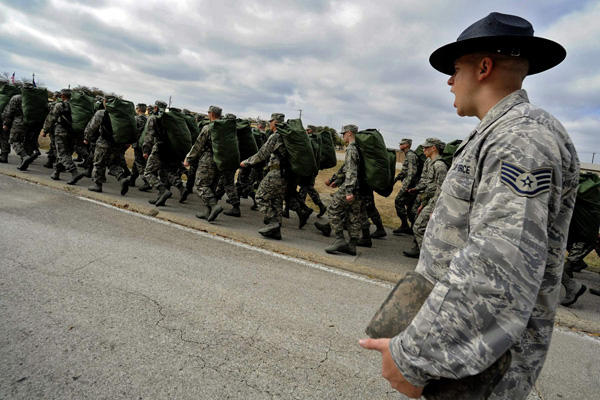 When I was in basic training, we were being marched somewhere, I don’t recall exactly where but I think it was the obstacle course. We literally marched everywhere, they never wanted us alone, and you had to be marching. If you were out there by yourself, even if you had permission, and a drill instructor caught you, they would punish and torment you for it. Hell, even if you were with the minimum two people they’d get you, but if you were alone, it was on till the break of dawn. In any case, we marched a lot.

One day we were marching and there was a pipe sticking up from the floor. The first airman hit it because we were marching in a straight line, then the second, and third and so on. Everyone was getting their damn nuts hit by this pipe, then when it was my turn, I broke ranks, got out of formation and dodged the pipe.

“Rodriguez, what the hell was that just now? Did you break ranks Rodriguez? I know my eyes deceive me Rodriguez, please, please tell me that I didn’t see that Rodriguez. You did not just break ranks, nearly trip a fellow airman, and bump another to avoid an obstacle. You didn’t just do that Rodriguez?”

Sir, Airman Rodriguez reports as ordered: I cannot insult your intelligence with a lie sir, I did break ranks.

“And why pray, dare I ask did you do such a thing Rodriguez? None of your element did that, why are you so special that you get to do things differently?”

Sir, Airman Rodriguez reports as ordered: I felt that this endangered my body, and would inhibit my service to the Air Force. It was a selfish act driven by my desire to serve my nation sir. Also, it looked very painful sir.

I swear I saw him lower his head and stifle a laugh. I almost got this dude to break. But then he doubled down!

“Rodriguez, I am assigning you to KP duty for this transgression! Do you understand me? Tomorrow morning, 3am you will report for kitchen patrol! Am I clear?”

Weeks later, that drill instructor pulled me to the side and told me that I was the only independent thinker in my element, and that the rest were fools for allowing themselves to be put in harms way like that. He said that nearly everyone would do KP and that he just used that moment as an excuse to assign me. By the end of basic training, my drill instructors treated me quite well. I was one of the more useful recruits and they recognized my value. As such I enjoyed a few perks, like some behind the scenes insight, extra food, and a bit more flexibility towards the end.