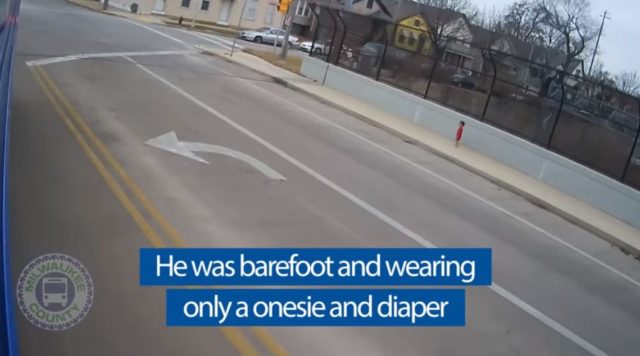 This is one of those stories where things could have gone really badly. Irresponsible parenting is the culprit here. Apparently, the mother left her toddler child outside. Never mind that the weather was below freezing and he was only in a onesie and diapers. Not only did this idiot mother leave the child outside, I can’t help but wonder what the hell the child was doing outside alone, not to mention in only a onesie during freezing weather.

Thankfully, this MCTS bus driver saw the child and took it upon herself to rescue the kid. She brought him aboard the bus and they comforted and warmed him up until authorities arrived. They state that the child was eventually reunited with his father. Call me a pessimist, but if this is how this kid is being parented, I worry heavily for his future. Hopefully his father is better at caring for him than the irresponsible mother who allowed this to happen.

Much gratitude is due to this caring bus driver who saved this child. Mind you, I believe this was the 8th kid rescued by an MCTS bus driver. Good on them!