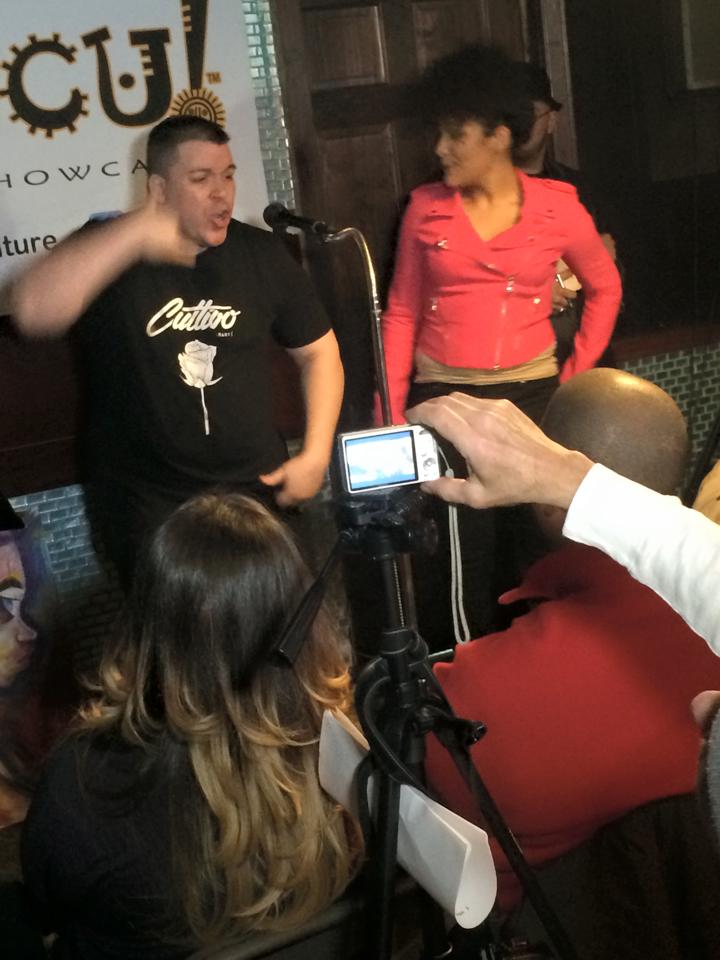 The Capicu Cultural showcase is in it’s 8th year if I’m not mistaken.  I have been attending “The People’s Open Mic” for about 3 years now. It has been a pleasure and a great honor to be able to share some of my life with such an amazing group of people over the years.

This show is run by “The Urban Jibaro,” George Torres and Juan “Papo Swiggity” Santiago. The show aims to continue the flow of the original Nuyorican movement, something I believe they have accomplished.

Let me tell you something about Capicu. Attending this event, this is where it all began for me. My awakening so to speak. This “Finding Latino” journey began way back in early 2012 during the first Capicu open mic that I attended. This is a true story, and I have told this to Papo. I am very open about the fact that my interest in our Latino Culture was awakened because of Capicu. No question about it.

The guys refer to this event as a cultural showcase, a name that is well deserved.  I first attended this event about 3 years ago. Amazement is the only way I can describe how I felt. Poets performed, teachers read, there were several musical acts, large and small, beautiful people and high energy. Oh, how can I forget, during my first visit, they had SPANISH FOOD! WEPA!

When I perform at Capicu, I feed off of the energy of my Latino brothers and sisters, and they feed off of mine! If you know Latinos, you know we are definitely high energy. During most performances, the audience has joined and sang along during the hook of my songs. That is one of the greatest experiences an artist can have. There is nothing quite like having the audience singing along with you.

Capicu also happened to be one of my little sister’s earlier performances. She joined me and we performed “El Gran Error,” and to make it even cooler, my mom was in the audience! Woot woot!

Capicu is definitely Latino themed, but you do not have to be Latino or speak Spanish to thoroughly enjoy the show. There have been white folks, black folks, asians, and even non-Spanish speaking Latinos in the audience. Even though they may not understand everything, they too fed off of the energy and vibe here. All are welcome, Latinos love everyone! Do not get hung up or intimidated by the name or theme, “we speaky English too!”

Performing at this venue feels very natural to me, I feel at home, and this was the first place where I shared something that I wrote entirely in Spanish. I must admit, during my first few visits, this audience felt a bit more intimidating than other audiences that I have performed for. I sensed that if you stand up in front of this group, you better bring it for real. Latinos demand energy, and you better bring that fire and deliver!

I still remember the first time I performed here. There was an interesting reaction by the large, rowdy group when I went up. They appeared uncertain, and confused. During the entire show I was sitting down, quiet, nervous, minding my own business, almost invisible. When this “blanquito” went up, no one knew what to expect, a few of them later told me they were shocked to hear I even SPOKE Spanish! By the end of my piece, everyone’s jaw had dropped and they were all on their feet, clapping, screaming, and cheering me on! My piece was a big hit with mi gente! Whew, I was so scared that first time!

This dude, I believe they called him Captain America (Angel) came up to me and kissed me on the top of the head, and stated how dope my piece was.  Everyone was giving me props! I felt so relieved, proud and honored that I could impress that huge, terrifying crowd. A young lady who was sitting next to me, Jakira, who stepped on me like 20 times that night said “Let me find out that this quiet white boy who I’ve been stepping on all night is the star of the show, why didn’t you say anything”? I had no idea how to respond, say anything about what? I was a noob hoping to be accepted, not sure what I could have said? I was humbled, all I could say was thank you for the kind words.

I have performed at many places in the city, and I will say this, the Bronx and Brooklyn have definitely shown me the most sincere love. Bronx Stories, when I performed “Dear Momma” for my mother, and Capicu when I performed “Power Struggle” as a Spanish poem.

I love Capicu, and I can’t wait for the next show!