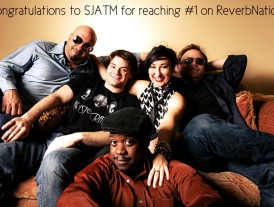 Let’s put aside ego, let’s put aside the b.s that we constantly have to be cool and hard core. Let’s be real here. As an “older artist” starting up in this young and beautiful person’s game called entertainment, sometimes I have doubts and questions about how my image will work against me. I’m a realist, my image is that of your average, every day working stiff. I’m the guy that wakes up every morning, gets dressed and goes to work to provide for his family.  I’m not extraordinarily fit or beautiful, I’m just your average guy. I just happen to love making music and writing.

So how does the average person get the attention of the world when there are so many beautiful, young talented people out there already? Enter Sylvana Joyce. She gave me a verbal whooping and some life lessons that I will never forget on this topic.

How the conversation began.

During an online chat with Sylvana Joyce she was advising me on how to get my work more visible. At one point she said to me that I should submit my work to Hip Hop festivals. I explained to her that I didn’t think that traditional Hip Hop festivals would consider me or my work. She then asked me why I felt that way and I explained to her that I have been told by some people from that side of the industry that my “image” is not going to be accepted.

In response to my statement Sylvana wrote this ::rolls eyes::

You know, online we can’t see expressions so you have to write them. Haha. But don’t worry, she followed that with the colorful statement “F### image Angel”. She said that as an artist I am the source! YOU CREATE the image Angel, not the other way around. She explained to me how the whole industry is changing and that I should not “regurgitate” what is cool or popular. She said that I should be the best me that I can be. Operative word there being ME!

Who are you? Is that bad?

You are a regular guy, one that went to school and got a college degree. After that you went and earned yourself a good career. What is wrong with that image? Your life as a whole is an amazing story of survival and a testament to what a real “image” is. What’s wrong with being a responsible father? What’s wrong with having a job and providing from your family? What’s wrong with dressing like a regular person? You are the REAL image of America, Angel.

You got out of the ghetto, you started with nothing! You were tempted by the gang life and the drug culture. You were bullied and tormented for going to school and trying to better yourself. You had a rough go at life, but you got out and made something of yourself! What about that is not admirable? Who can’t relate to that? YOU are everyone Angel! The fancy glitz and glamour rappers out there, those are the exception, how many of them actually make a good life for themselves? You already have, without music, without writing, just as a regular guy. You are the majority, the regular guy that made it through the regular path. Your image is as real as it gets.

Now that you are established as a responsible adult and contributing member of society, you made the decision that you can start working on your talents while still taking care of your family. What’s wrong with that? That’s an image, make the world accept and see the real image!

Who is Sylvana Joyce?

My truth is that I’m crazy and I don’t like to brush my hair. Once I accepted that, everything else fell into place. There is nothing that builds up the confidence to sell your music than feeling like you are promoting something that’s really you. You have no one to answer to, no one to look like, or anyone else to pay tribute to.  You will start a trend, you will be the image. Who can’t relate to people like us?

You don’t have to be the previous idea of handsome. You can start the trend of who you are and get people trying to model after you! That might sound perverse, but look at Barbara Streisand, she actually had women wishing that they looked more ethnic. You know why that is funny? Because Barbara was really self-conscious about her nose! Barbara was a whole different energy and character than other leading ladies. So there ya go. Even now there’s a whole generation of kids still trying to dress up like the rock stars of the 60s! You know what they were? They were all kids themselves, unwashed kids who didn’t know how to dress.  Once you bring real, original talent, you are the trendsetter, people model after you.

Forget genre, and forget image! You already have that, YOUR image. Leave it up to others to define it, and let them emulate the real you. There are already hundreds of artists out there trying to be Eminem, Rakim, Bon Jovi, Britney Spears, Beyonce, and anyone else that has come before. Be the best ARodomus that you can be. You’re welcome Angel! Those are my two cents whether you liked it or not!

How many of you can relate to this conversation between me and Sylvana? Attending music events, I observe so many beautiful people, trying so hard to be accepted. I pick a little corner and just quietly stand around, I can’t compete with all this amazing beauty around me. I’m just too regular. Well, I really needed this advice from Sylvana, it really gave me some perspective. I recently attended another industry event, and I just simply accepted that I am what I am, just a regular guy. But my talent will speak for itself over time. Who can’t relate to that? Thank you Sylvana, your two cents were amazingly helpful to me as an artist, and as a human being.