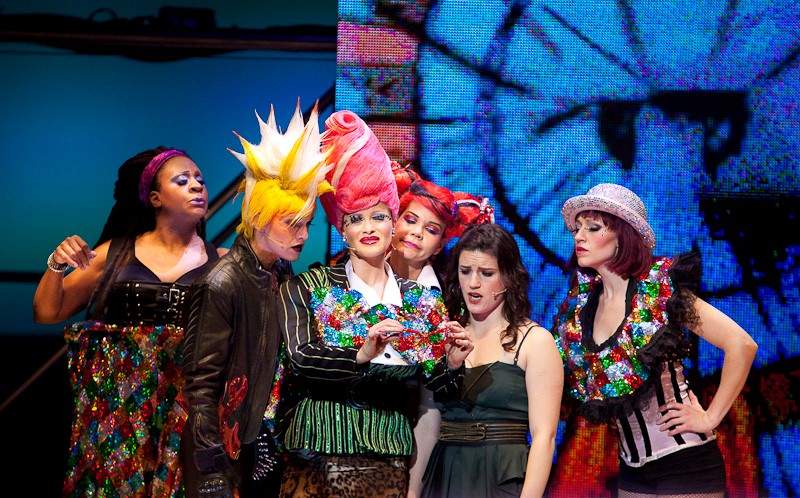 A few of my friends told me this was a great show, they got in for free with Yelp. Jerks! LOL. On a whim, I decided to buy tickets and take my wife. They were $30 each for front row seats. Amazing…..

The show was in Queens theatre, a little out of the way for most people, but not so bad for us. A bit troublesome heading out there on a rainy night though, but you know what? I’d do it one hundred times over.

This show was absolutely amazing, you know they are bound for broadway, and they totally deserve it. The show had acrobatics, singing, dancing, violins, comedy, drama, beautiful, hot men and women! There was a little bit of everything, and it truly was an amazing show.

The story revolves around a girl who is mistreated by her boyfriend. The dude wants the starlight and in the process he ends up hurting and disappointing her time and time again. She is an artist and throughout the show her characters come to life and give her a much needed butt whooping to get her in order.

There are scenes where her character “Lightning Girl” fights with a demon, there are violin solos, dance solos, vocal solos, comedy, they even involve the audience in a few parts, tons of fun. I can’t get enough of this show. I found most of the performer’s pages on twitter and facebook and sent them congratulatory notes, in addition to “liking” or “following” them, they were all amazing.

The show is set to hit broadway in 2012, but that is still up in the air. Either way, sooner or later, this will become a mega hit, it’s just too damn good. So yeah, I sat in the first row, right in the middle, for $30! Hate on haters, haha. You really can’t beat that! And it was one of the better shows I have seen in a very long time. Totally worth it, and I would totally go to see it again on Broadway, I’d love to see Lourds Lane make it there!

One of the songs is called Misfit, and I can totally relate to that. Oddly, as a “misfit,” I was often rejected by my fellow Misfits who were interested in the cooler guys. Meh, life is funny that way.