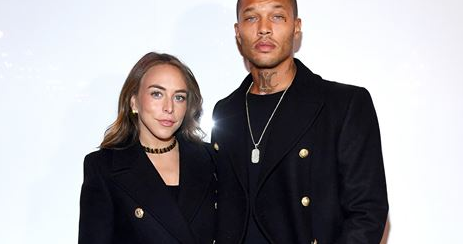 I have no idea who Chloe Green is and frankly, I really don’t give a damn. I don’t know much about Jeremy Meeks either, except for the fact that the internet went nuts and collectively lost their shit when his mug shot was posted online.

Allow me to reiterate, this guy got internet fame because some women (and some men) went nuts over his mugshot. A mugshot that was taken during his arrest and subsequent conviction on the federal charges of being a felon in possession of a firearm and grand theft. Bare in mind that this dude also served time for assaulting a 16 year old, thus the “felon in possession of a firearm charge.”

Due to his internet fame, this guy got a modeling gig after coming out of prison, and somehow caught the attention of this billionaire woman who must either be blindly in love, or just really fucking stupid. I don’t know.

Yes, I’m hating on him. Let me tell you why though. I know many models, upstanding citizens who have been busting their asses, and they have never reached this level of exposure. Yet this guy, a damned criminal, is living the good life. And now, this dude ends up hooking up with and impregnating a billionaire. Talk about hitting the lotto, eh?

On Love B Scott’s site, they penned a piece with the caption, “bag secured.” Which is exactly how I perceive this, and I find it hilarious that this woman, Green, doesn’t realize the insanity she’s getting herself into.

On the other hand, once I get passed the hating on him, I’m actually hoping that this dude has got his shit together and will stay on the right path. Like I said, I don’t know anything about Chloe and unless she’s gonna pay for my kid’s college, I really don’t give a fuck about what she does with her life or money. Rich people are generally foolish, especially the ones who don’t work for the money. They’ll never understand what it’s like to be poor or have to earn your keep. But, this guy has a second chance at life for himself and the family he’s left behind. I hope that he does the right thing and stays on the straight and narrow. Perhaps he got a bad break early on and deserves this success? I don’t know, but hating aside, I’ll give him the benefit of the doubt. Don’t prove me wrong, Meeks.