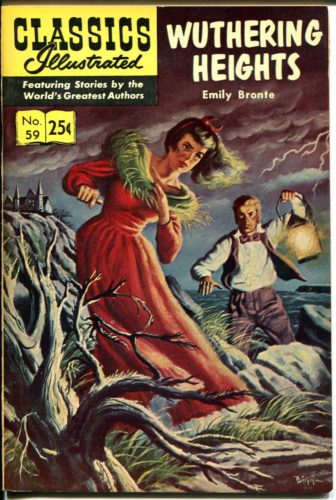 So after reading this book, I have to yet again ask the question: What the hell is wrong with people? First of all, why are the characters here so cruel to each other? Much like Pompeii, this story didn’t go at all according to what one would expect as they read. Heathcliff for instance did not behave at all as one would expect towards the end.

There are situations where I figure the “right thing” will happen, but that never comes to pass. These are some seriously jacked up people. Come to think of it, the way these stories read so far are like those damn novelas, soap operas on tv. Except that for the most part, unlike in those, nearly everyone gets screwed here!

Another question I wondered about is why the hell do people stay around for this level of abuse? I don’t know if this read is fantasy or the way things actually used to be, but this was ridiculous.

By the time I finished reading this, my wife asked me, “Another bad story?” Yes, another one where things didn’t go how one would expect. Not for nothing and at the risk of incriminating myself at some point in the future, but if I were abused the way these people were abused, I’d leave. If leaving wasn’t an option, well, then I’d handle it by any means necessary. This is just nuts to me, why do they allow it to go on?

I’m slowly working my way down these classic stories, but I’m troubled by the tales that they tell. As per usual, I won’t drop any major details or spoilers, but seriously, what the hell is going on here?