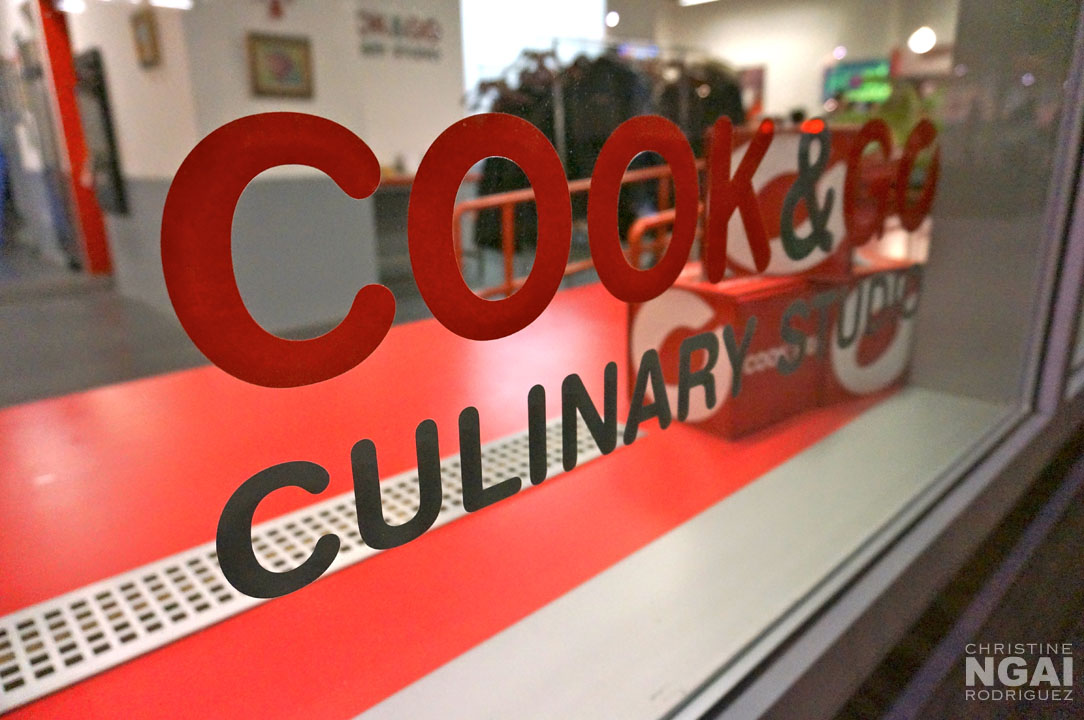 The first thing you notice upon arriving at this place is that it looks very chic, you get that impression right from the outside of the venue. Upon entering the studio you will notice that there are two classrooms, at any point in time, there could be two completely different classes happening here.

I arrived slightly early; I saw who I would soon come to know as my instructor, Chef Christina. She was preparing the classroom for the upcoming class. Shortly thereafter the organizer Michael from Blue Polo interactive, and some of the other bloggers arrived. We mingled and spoke as we waited for others to arrive. As we waited for the other bloggers, we were offered white and red wine, and for those of us that don’t drink we had apple and cinnamon flavored water, which is supposed to be good for detoxing your body. Once the other bloggers arrived, we got to work, we got to cook.

Visit http://cook-and-go.com/ and enter the coupon code BPIBLOG for 15% off!

The first dish we created was a pastry, it was a pear, raspberry and brie puff. We were all given a pastry, and then we cut it into quarters. After this, we took the pears and cut them up, we diced up some raspberries, and then we added a few pieces of cheese. We rolled them up into these little dumpling looking thingamajig’s and put them in the oven. Hmmm. Smell that? Next up comes a Tuscan white bean crostini, this dish was prepared by dicing up some red peppers, some onions, some garlic, and then putting in some white beans and oregano. To this, we added some red-wine vinegar, some chopped up fresh parsley, olive oil, a bit of black pepper and mixed it up. Then we put this bad boy on that little piece of French bread, and deliciousness ensued. Again, Hmmm… After this we worked on some date filled cakes, we started with some cream, butter and sugar, we mashed this in a bowl until it became this doughy substance. Next we took some dates removed the pits, and got to mashing them suckers down with some forks. So we took the doughy substance, flattened it out, then we took our cool little date creation and added it to the doughy substance and rolled them up into this little football shape. Then it is straight to the oven. This was by far my favorite dish, and Chef Christina really made me feel like this was something I could easily do on my own at home! So I’m excited to make this again! Then came some s’mores shooters, with the s’mores, we didn’t really prepare these; we battered the dish a little, but we were more like the helpers and kind of dressed up the creation. It was fun even so. Let’s get to cooking some apricot chicken! For this dish, we got some apricots, some onions, once again red bell peppers, and some pieces of chicken, which we cut into thin strips. We then created this flavoring made of olive oil, unsalted butter, some chicken stock, some fresh rosemary, a little bit of cinnamon, and some Tabasco sauce. Really, it is up to you how much Tabasco you want to put in depending upon your level of tolerance and taste. This experience was a lot of fun, chef Christina was very knowledgeable and made learning how to cook these dishes a great delight. One of my great thoughts is thinking about the smell of the dishes cooking while we were preparing the other dishes. Most people devoured their dinner dishes at the event, but I decided to bring some home for my husband NYCTalking editor Angel Rodriguez to try. His comments will follow at the end of the post, yes my husband is going to review my creations.

I was given this cool little box with some promotional material, a discount code, and an awesome apron that my husband is modeling for you. Editor’s Note (Angel Rodriguez): Okay, so I’d be a fool to come on here and say that something my wife made was bad. So that’s not going to happen. LOL. That being said, I enjoyed the dishes she brought home for me. I ate some the night of, then the following day when I came home after work. Good stuff. I really wish that I could have attended the class, but I think that future events like these, if only one person can go, it should be my wife. She would enjoy this far more than I would, though I’m sure I’d enjoy it too. 🙂 One of the dishes, the white bean dish, definitely favored the garlic, the garlic was strong in that one! I’d feel terribly sad for any vampire that partakes, but I am a fan of garlic, so I enjoyed it. I also am a big fan of red bell peppers, the natural flavors there are amazing. So my wife did good on this one. LOL. Plus I know what’s good for me. Hahaha.

Visit http://cook-and-go.com/ and enter the coupon code BPIBLOG for 15% off! If they ask, tell them your friends at NYCTalking sent ya! We’d love to hear about your experience too! Hit us up in the comments section!

Here is a detailed recipe on how to prepare “Purses filled with pear, brie and raspberry” from Cook & Go!

Unfold on a lightly floured surface:

Cut into 24 (2 1/2-inch) squares. Divide the brie, raspberries, and pears among the pastry

Bake for 15 minutes or until the pastries are golden brown.

An evening learning to cook with Cook & Go! http://t.co/bdELQ4bjYa