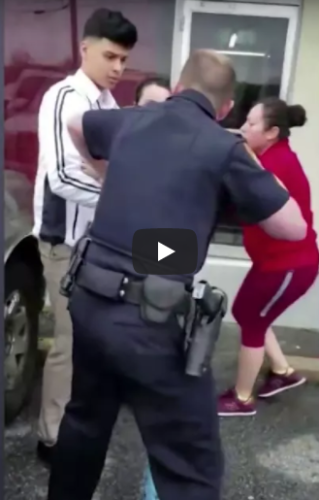 Should you cooperate with law enforcement?

As far as I can remember, I have always said that you should cooperate with law enforcement. When an officer stops you, if they issue a command, obey it. If they are wrong, you can always handle it later on down the road. However, if you resist, you can end up dead. This is what I tell my son, this is what I have always practiced, and this is what I preach. Don’t worry, if they are wrong, we’ll deal with it afterwords. Just don’t resist and cooperate with law enforcement. I think that’s sound advice.

Lately though, as I observe more and more videos of police officers abusing their power, mistreating citizens, and overreacting, I can’t help but wonder if the time has come to push back? How many times do we as good, law abiding citizens cooperate, yet they still end up killing or abusing us? We are the people that law enforcement is supposed to protect and serve, but we all know that they don’t always do that.

Normally, I’d frown and condemn the people who were stepping in and putting their hands on the officers. I have always said, “if you don’t want to get shot or go to jail, never resist or fight an officer.” However, let us not forget that these cops are men and women just like you and I, and they too need to start exercising restraint when dealing with people as well.

I do not have all the details of what happened here, but I am getting so damn fed up with some of these cops abusing us civilians and getting away with it. Every damn day we hear news of another murdering cop who isn’t being charged! Stephon Clark, Alton Sterling today, and on and on it goes! I fear that there may come a time that they regret all this excessive use of force against the people who outnumber them.

These officers need to realize that the only reason the people don’t overtake them is because we are good, law abiding citizens. People like these exercise restraint, despite appearances. Do you really think that if they wanted his gun, they couldn’t take it? Sure, they may die in the process, but so would he and others. Also, remember that second amendment so many fight over? That evens out the field when it comes to one of the major advantages that law enforcement has.

I’m not a proponent of violence, but if they don’t start treating us with respect, things may reach a boiling point and many lives could be lost on the civilian and law enforcement side. That would suck for many of us because we are civilians, we follow the law, and some of us have family who are in law enforcement. I have cousins and good friends who are cops, and I don’t want to see them hurt. They are good cops, but these bad apples put them in a dangerous situation. That’s in addition to the already existing dangers of the job.

In this case, you can call me crazy, but I don’t think that these women, children, and young men posed a major threat to these officers. The only benefit of the doubt that I am giving them here is that I don’t know the context of why they were there. And if that isn’t some amazing reason, in my eyes these cops messed up. Heed my words bad apple law enforcement people, start to treat us with respect! If you treat us with respect, maybe things can improve.

Watch this video, if they wanted to, they could have taken that cop out. They didn’t do it, and its because they chose not to. They are trying to keep from breaking the law.  But cops like these need to stop pushing or I predict one day they will pay the price.

*UPDATE* It appears that police were investigating a runaway teen. Apparently, the girl was with the Pastor’s family. The details of that situation are not revealed here, so I can’t speculate on that. All I know is that the mother wanted her child back, called it in, and then this madness happened. The Church family members have been charged with felonies for assaulting the officers and the girl is back with her mother. It doesn’t seem like she was being held against her will.

In my opinion, both sides here lost control and things escalated. But my point stands, police officers need to learn some restraint when dealing with civilians. Humans will instinctively defend themselves and their family when in trouble. If you ask them to get on the ground, and they start going down, why the hell would you rush in and slam their body and face into the hard ground? If you do that, they will attempt to protect their face and body from the fall, then you use that as “resisting” and beat the crap out of them. Just cause you are a cop, it doesn’t mean you are always right or can do as you please. Learn how to deal with things at the right level. None of these people were a threat until you made them a threat.