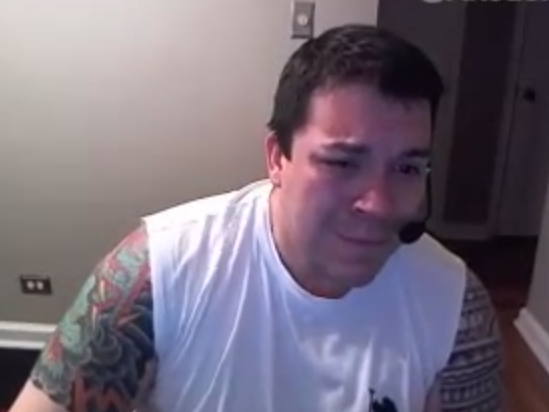 If you know me on a personal level, you know that I am generally a cheery, feel good person. Even during the worst of circumstances I try to keep a positive outlook, gain some perspective, and for the most part, I think that I am still pleasant to be around. In spite of being in the middle of shedding tears, or being in a fit of anger, I can always crack a joke and try to find humor in most any situation. That’s just the type of person that I am. That being said, with the loss of my father, I am not sure how I am handling this. For the most part, I have buried myself in television, reading, and otherwise escaping from the real world. When I am present, I tend not to think about it, and to most people, I appear just fine. Hell, even to myself, I appear that I am perfectly fine. That is until out of nowhere I pause, freeze, my eyes begin to swell, and the tears begin to flow generously down my face. Most people are surprised because it is possible that only moments earlier I was laughing heartily. It happens so suddenly, that I am certain that it can be unsettling.

My waking hours are not the only ones that are affected. My sleep has also been disturbed. In the beginning I rarely slept, I would always wake up crime, in a panic. With the passing of time, I’ve been able to sleep, but not at night. I sleep mostly during the daytime hours. Since I am currently unemployed, I do not have a set schedule. So I can be awake all night long, hit the gym at 6am in the morning, then come back home, shower, and sleep for the whole day. Lately, I have been able to sleep a few hours at night, but without fail, I wake up for several hours, then go back to sleep during the day. Here is an example of my sleep patterns for the past few days.

11PM – Sleep.
2AM – Wake up. Eat some turkey and lechon. Watch a little tv. Play a video game. Read and or write.
7AM – Gym. Weight lifting session. Eat some food post work out. Back home. Shower. During yesterday’s longer sleep session, I had 3 bizarre dreams.

1. My dad was in my old home. Our place in Clarke in the Bronx, he was in my room, saying good-bye and trying to hand me some money. I remember being in a panic and not wanting to say good-bye. I held on to him and told him to take the money. But he insisted that I take it. Then I woke up.

2. I discovered that my dad had a child with his last real girlfriend, Margie. In the dream, I saw the child, a disabled young child in a crib. But I never knew that the child was theirs. I put two and two together and realized it later in the dream. However, the baby had died sometime before I knew this. Then I woke up. 3. I was in front of my mom’s current building. Some Puertorican guy attacked me. He was big, strong, but clumsy and didn’t know how to fight. So I took him down to the ground quite easily. I subdued him and told him to calm down, that I didn’t want to fight. He said okay man, and I released him. That’s when he reached, pulled out a gun, and shot me in the face. The SOB blasted off my freaking cheek bone. It hurt, but it didn’t knock me out. He continued to shoot, but missed the rest, ran out of ammunition and began to retreat. My friends saw all this through the window, and they threw down my gun. I took the gun and chased him. Somehow Lucy Liu and a large chow chow got involved!

She was trying to help him escape, as I shot for him, I hit her in the back and chest several times. She died, her dog laid down next to her, and the perp continued running. I wanted to give chase, but that’s when the police showed up. I began explaining what happened, that I was shot. That’s when I woke up.

And those were “calm” dreams. I’ve had much worst dreams than those.

That is how I find myself these days, very unstable and emotional. The latest episode of random tears came forth at my mom’s place during Thanksgiving dinner. Being at the house, a place that my dad had visited in the past, sitting down on the couch, I was saddened and began to cry.

I don’t know what my family made of it, but they knew why it happened. My mom reinforced that he just died, and that this is normal, “It just happened my son,” and she tried to comfort me. My little sister said, “It just seems so surreal that this has actually happened.”

Surreal is the perfect word, see, though I am positive, this is real, I guess my mind hasn’t properly absorbed it. Perhaps this is what true denial is? I don’t know. I’ve never experienced it before. I know it is real, there is no doubt in my conscious and logical thought processes that he is gone. However, there is a part of my mind that is shutting that fact out. I suppose this is why there are times that it hits me so hard, the realization that it is real.

After a few moments, I was perfectly fine, like nothing had happened. I don’t know what I am supposed to do. I’ve never dealt with loss of life this closely before. Am I supposed to bury myself in pictures of my dad, listen to his voice mails, watch old video, to provoke the pain? Should I simply keep doing what I’ve been doing all along? We all deal with grief differently, and frankly; I have no idea what I am supposed to do. I suppose I will just continue to live and deal with my emotions as they come.