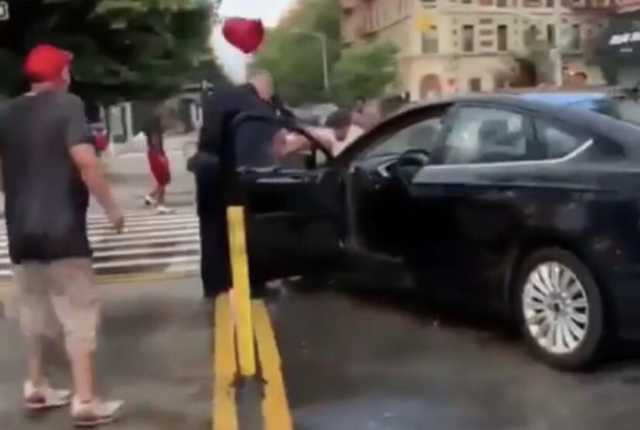 If you follow my work, you know that I often call out police officers when they are wrong. It needs to happen and I am definitely one of the ones who is doing it. Cops are not always right and sometimes they do some dirty stuff.

That being said, when something wrong is done to cops, I’m also going to call it out. In the image above you see a screenshot from a video that shows a red bucket flying as it bounced off the head of a New York City Police Officer. This officer was in the process of handcuffing a suspect. I don’t know the details of that arrest encounter so I cannot speak my opinion on that. However, as a citizen of this city I cannot condone or applaud someone attacking an officer when his back is turned and he’s engaged in an arrest.

In addition to this event, other officers were soaked by citizens in a different case. The bucket throw is definitely an issue for me. The water, I’m a bit more flexible with. I take issue with it because it’s disrespectful to our men in uniform and it can damage their property, but I wouldn’t lock someone up over it. The bucket guy though, he’d definitely go to jail. If you damage property, you should be responsible for it, but I wouldn’t push jail.

I mean fair is fair right? If I wet your cell phone, you are gonna want me to replace it right? Same thing here, you damaged their property but its tax payer dollars being used to replace it. Since it’s not directly coming out of your pocket, you don’t care. Well, screw that! What they should do is that if you damage it, you pay for it! Why should we tax payers be held responsible for your wrongdoing?

I have always discouraged assaulting police officers at all. That action can have fatal results at worse, or at best get you locked up. In fact, I encourage that people in general keep their hands to themselves.

I have to be honest though, there are times when cops are clearly in the wrong and because of their badge and gun we are not allowed to resist or intervene on behalf of the victim. I say victim because there are times that police officers do victimize innocent people.

I often ask myself, “What would I do if I were being abused by a cop when I did nothing wrong?” Am I supposed to just ball up in the fetal position and let them beat the crap out of me because they just want to or over a case of mistaken identity? Am I supposed to forfeit my life? You know they’ve locked up innocent men for decades by mistake and or maliciously!

What recourse do I as a private citizen have when a cop crosses the line? If I fight him, they’ll say I was resisting arrest. If you help me, then its obstruction of justice. But its a basic instinct to try and protect yourself when being harmed or beaten, its human instinct. Can you blame a person for that? Would I support intervention at that point? That’s a hard question isn’t it? Because it’s a lose lose situation at that point. If a bad apple cop targets you, you are in a bad spot at that point.

I don’t know the details of the red bucket arrest, but there was no visible beat down being administered and it seemed like a lawful arrest. Not that I’d say that if a certain condition was met I’d support assaulting cops. Despite all that I have said above, I maintain that assaulting a police officer is wrong and I strongly discourage you all from such behavior.

Given the level of exposure this situation has gotten, they are probably looking for this red bucket guy. Frankly, he’s lucky this cop was composed enough and didn’t retaliate for the assault. I don’t know too many people who would be cool with being hit in the back of the head with a bucket while doing their job. Do you? Don’t forget, cops are people too!