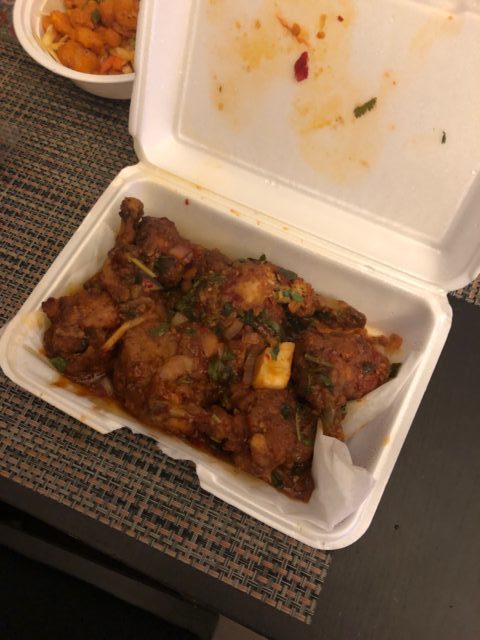 Some days ago my lady was craving Indian food. We had ordered from Danshiri once before so we decided to give them another try.

I have to provide full disclosure, I’m not a particularly big Indian food eater. I have nothing against it, but it’s just not something I eat that often. That’s just how it works out for whatever reason. That being said, let’s move on.

So I don’t even know what the heck my wife ordered. I forget the name of the item, but it looks like this. She seems to like it and ate it. I on the other hand went pretty damn basic and got some tandoori chicken, a signature spicy chicken pictured above, shrimp and some garlic naan. You know, as I mentioned before, I’m not a big eater of Indian food, but for takeout this was okay. The spicy chicken was definitely spicy. The tandoori was not as dry as I have had it in the past, and I guess that’s a good thing. The naan was aight and so was the rice. I don’t have anything bad to say about this place, but nothing exceptionally good either. I’m neutral. If my wife wants Indian, I’m cool ordering from here or trying somewhere else. That’s my stance on Danshiri.