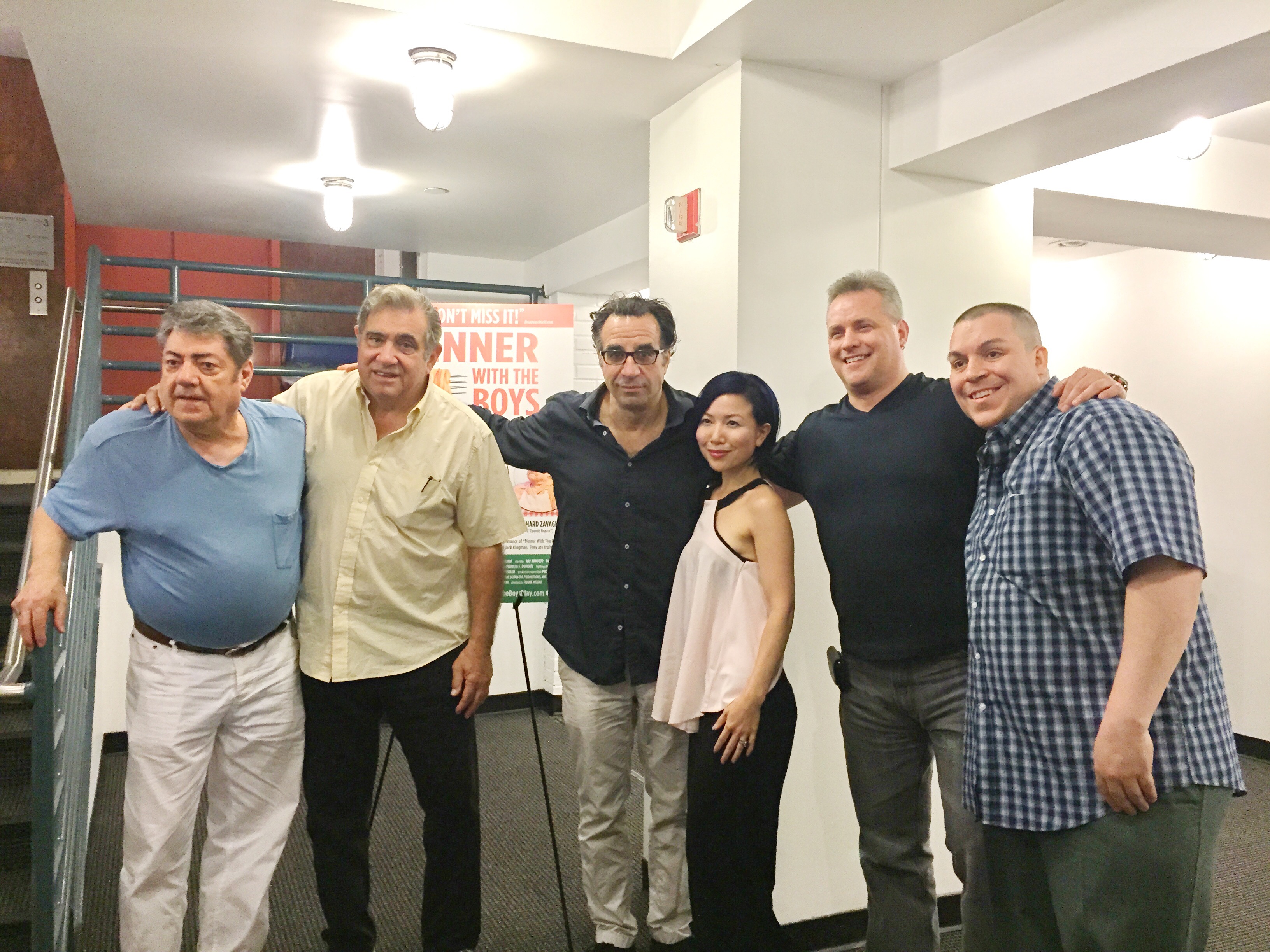 As if that’s not enough, let’s go on and add kicking it with a Soprano cast member, Ray Abruzzo, and one of the actors from Donnie Brasco, Richard Zavaglia.

Next, let us add a threatening introduction about how one can end up underneath a lot of cement for taking any pictures and you’ll have a vague idea of what my night at the play Dinner with the boys was like! The play which is written by Dan Lauria, takes place in a small house somewhere in the Jersey sticks. The boys, Dom who is played by Richard Zavaglia, and Charlie who is played by Dan Lauria have been banished out there by the current family boss, Big Anthony Jr who is played by Ray Abruzzo. They’ve been living in peace, gardening, and preparing for their final meal. You know, what more can one want in life than to eat a delicious homemade dinner every night with a good friend? I mean who cares if the main course is your former best friend and crime partner? Such is life, right? Know what I’m saying? Fuhgedaboutit!

Watching this show was slightly reminiscent of an odd couple, where the fellas are best of friends, but fight quite a bit. I mean the very first scene has Charlie screaming at Dom for not calling to check in. He’s angry, loud, but clearly concerned for his friend. I mean they are being punished by a mob boss after all. Never can be too careful.

Speaking of being careful! So I decided to run up and jump on the stage for a picture. But I got busted before my wife could press the button. They kicked me off the stage and we took this picture instead. Meh, it was worth a shot! At least I didn’t end up in the garden or underneath some cement. Know what I’m saying?

@AngelRdotMe watch out or you will be sleeping in the garden. There are so many funny scenes in this show that I can’t share without telling you everything surrounding it. Then I’d have to label this review with the caption *SPOILERS*

The two fellas spend a lot of time at dinner reminiscing about their old friend Leo who they happen to be eating by the way, and who’s bones they used to create an amazing fertilizer for their garden. They often speak about what a great and merciful guy Leo was as a killer! They say he had a heart of gold because he didn’t fancy making his victims suffer. For instance, the benevolent Leo slit a mark’s throat BEFORE throwing him into an alligator pit. He ran over a man’s face rather than letting some red ant’s eat it off. That’s just the kind of great guy that Leo was, he didn’t care to make them suffer.

He was a great driver that Leo!

The dynamic between the boys was amazing. They all flowed seamlessly between scene after scene without a hitch. And no, I’m not saying this because I’m afraid of ending up under a cement building. These are all very experienced and established actors, and as one would expect they all did a great job.

The villains, if you can call the guys who are in charge of killers by that term, were both played by Ray Abruzzo. Two different characters, with different voices and demeanors. He played them both spectacularly, and did a great job of… Well, I can’t tell you! Remember, no spoilers! You gotta watch the show, eh?

At the end of the show the fellas stuck around for a blogger q&a and that was totally awesome. They answered all of our questions honestly, and kicked it with us for a few minutes. We took some pictures and shot the breeze. The guys were being directed to head out, but they did take some time to hang with us, and we greatly appreciate it.

It was bizarre to hear these guys talking about how they were hanging out with Dom DeLuise, Peter Falk, and Jack Klugman during the first reading. Masters of the craft talking about masters of the craft. Truly an honor to listen to the stories. My father was a huge Columbo fan, so when I heard the name Peter Falk, I thought about how my dad would smile if he were still here!

As an aspiring actor myself, it is awesome to get to meet and rub elbows with masters of the craft like these guys. I’m not there just as a fan or a blogger, I am also studying and watching all that they do as they work. I’m hoping that through osmosis perhaps I will absorb some of their amazing talents!

This was a great show, and I highly recommend you catching it while it’s still at this location! You’ll have some great laughs!

During the Q&A the guys were very forthcoming and shared some pretty interesting information with us. Everything from insider information about the Wonders Years’ fate, to how they perceive the different audiences. However, I ain’t no snitch, and I ain’t telling you nothing about what they told us! NOTHING! This is one of those times that you were either there, or you weren’t. I ain’t gonna say nothing! Fuhgedaboutit! Dan Lauria wanted to put a comedic twist on the typical mob type of story. I think he did a spectacular job, and though I am not Italian and I can’t catch all of the cultural references, I caught about 95% of them! Another thing to note that Dan was extremely clear on, is that there wasn’t a single curse in this play! Congratulations boys, I think you got yourself a winner here!

Awesome coverage Angel, and your whole blog looks fantastic! It was great meeting you last night, keep in touch! 🙂

Likewise, the pleasure is all mine. 🙂 Keep in touch!

Man, you’re busy hanging out with LEGENDS! So cool! Nice write up!

This was such a fun post to read. Funny and also I cannot believe you actually went on the stage hahaha. Bravo! 🙂