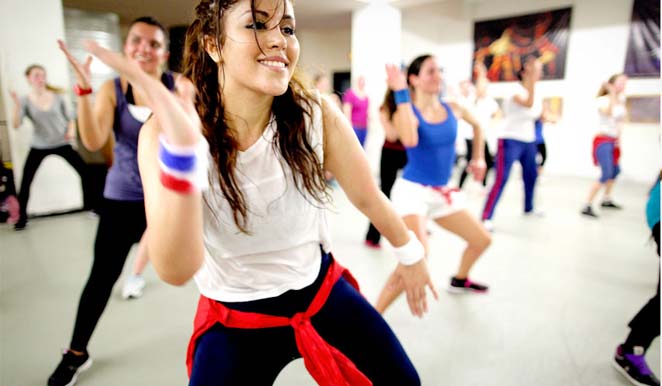 We were in the middle of a class, and this guy came in with his phone, he wasn’t even participating, he just walked in and started recording women’s butts in zumba class. Dude just started filming the girls dancing, and if that wasn’t enough, he pointed the camera at their butts!

Within seconds of realizing that he was filming the group I was on top of him, covering his phone lens, and very firmly telling him that he was not allowed to film the zumba class. He nodded, put his phone away once I released it, and left. I invited him to join the class, but repeated that he cannot film the group. I shook my head and said it’s extremely disrespectful to be filming women’s butts in zumba.

This dude is lucky that the instructor who was in there is relatively new, and she didn’t know how to properly handle this. I know a few instructors who would have ripped this guy to shreds over this behavior.

The point of this is very simple, do not film people in classes at the gym. If you intend to film someone, make sure it’s only that person, and get permission from the gym. Most gyms have a policy against taking pictures or video of the members, especially, especially without prior written consent! It’s a huge legal issue and can really cause trouble for people.

I work at 3 gyms, and 2 of the 3 have been very clear and strict on this policy. They allow us to take a post workout selfie, if the members want to be a part of it, but none allow you to simply walk in and film a dancing group.

This should be obvious, no? You don’t film women dancing, working out, without their permission. Who wants their sweaty pictures, vulnerable positions, etc, posted online by a stranger, without consent?

I wonder, what kind of nerve does some guy have to walk into a class, take out his phone and start filming? To make matters even worse, then take the phone and point it at someone’s butt? What world does a guy like that live in where he thinks that this is acceptable behavior?

I’m glad I checked him, and so were the girls. They all thanked me, and applauded me for going after him. If he ever does it again, I’m gonna snatch his phone, make him delete it, and then drag his butt to the front. It’s not cool behavior people, don’t do it.