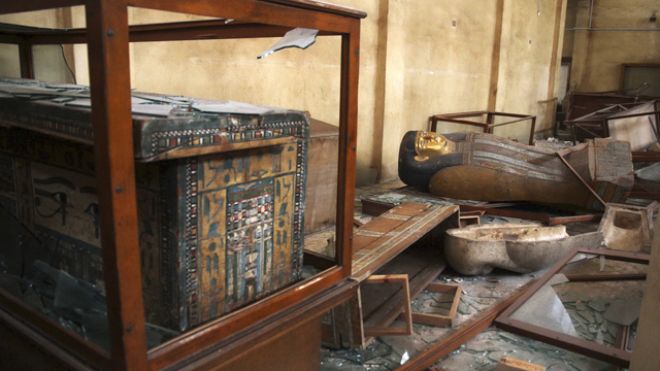 I’m sure that anyone who is breathing and has a news channel or internet connection has been staying abreast of the way things are in Egypt at this time. I just read an article by the Associated Press that I found terribly saddening. Looters took to a historical museum in Egypt and stole many priceless artifacts, in addition to this they burned mummies and items that they could not carry. According to the article the looters are “getting back at the Government for killing people in Cairo.”

The situation in Egypt should be a warning to the rest of the world. We are not as stable and indestructible as we may think we are. A country requires good leadership and a unified people to keep the opportunists at bay. The individuals actually committing the atrocities are young boys, apparently being coached and overseen by grown men and others that are posted in sniper positions. A museum ticketing clerk was killed during the first of the museum raids.

Things are going from bad to worst in Egypt. What is to become of this country? How will the Government reign in the violence without further massive acts of violence? Can it even be done? I pray for the people of Egypt.

@rootsyntax thanks for the RT! Reading about this was heartbreaking. http://t.co/DyHvkE0LnU

Egypt has had the proverbial poop hit the fan. They are in my prayers. http://t.co/LZmK7U3Dge