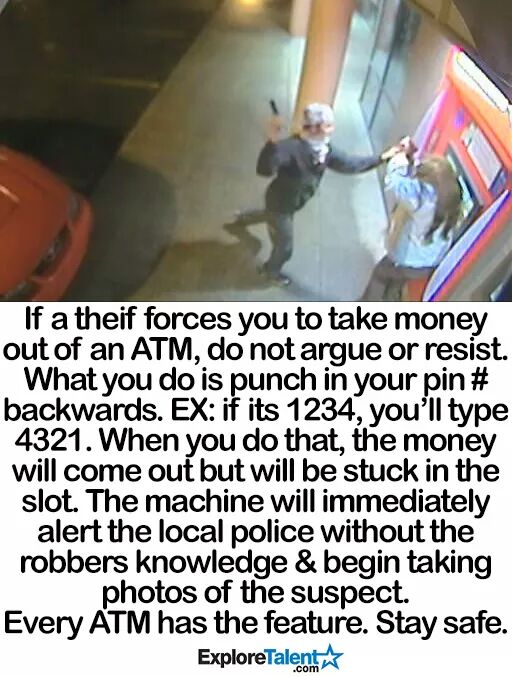 Ladies and gentlemen, there is a meme out there that has been circulating which states as fact that entering your atm pin backwards, in the event of a robbery would lock the money, alert the cops, and start taking pictures of the suspect.

This is untrue, as per snopes, and several other research. Apparently, this was an idea that never came to be. So, the point I’m trying to make here is simple, don’t get yourselves killed. We all work hard for our money, and we are not eager to part with it, however, this method won’t work to protect you. All this will do is not give you any money, and keep you in the presence of danger much longer than necessary.

At the end of the day, there is only so much money that they can steal from you at an ATM. You can always try to catch them later, but don’t gamble with your safety. What’s the limit, $1,000 or something? Sure, that’s a pretty nice sum of money, but is your life worth $1,000?

The best steps you can take to avoid being robbed at an ATM, is to not withdraw money alone, don’t do it late at night, don’t pick desolate places, and if at all possible, go into an ATM that has a secure door behind it. Some stores have ATMs outside, or inside, and those are a bit more risky.

Granted, there is no 100% surefire way to avoid getting robbed, but common sense can go a long way in keeping you, and your property safe. The backwards pin however, that will not.