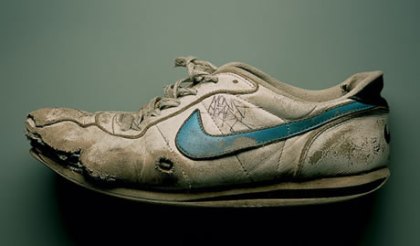 As I sat there irritated that my new sneakers don’t fit as comfortably as I’d like, the new sneakers that I can’t return anymore because I already wore them to teach, I’m conflicted. First of all, how the hell are you supposed to know if a pair of sneakers works properly, if you don’t actually use it? Foot locker says they’ll allow you to return unworn merchandise. But how can you truly try it, if you don’t actually use them?

Somehow the bottom of these sneakers got really dirty, and though I made a valiant effort, I could not get them clean enough to make an attempt at returning them. I don’t want to put myself through that battle when I know I’m wrong and being deceitful. It’s just not worth it to me to fight a battle when I know I’m in the wrong. So I’ve accepted keeping them, threw in some better insoles and I’m hoping for the best. I know that foot locker won’t be made or broken by any one pair of sneakers, but I understand that if they accepted back every pair that was worn and couldn’t be resold, they’d probably be out of business in no time. I get that.

In any case, the point I wanted to share was how spoiled and entitled we become as we get more successful in life. Granted, I know the value of a dollar, and if we pay for a product, we damn well expect that product to produce the desired result, I mean that’s how the marketplace works. But to have that expectation, to think, “how dare these people provide me with a sub par product,” this sense of entitlement is interesting.

I remember when I was a kid, I was always fortunate that my momma bear would turn the world upside down to get me the sneakers that I wanted for school. There was one instance in sixth grade that changed it all for me. I had come to school in some “Action 3” sneakers from some discount store and I was ridiculed for hours on end by Roberto Rodriguez for being poor and having skippies. Of course, being weak followers and just trying to be down, the other kids joined in on the cruel abuse. This was all new to me, before then, I had no concept of skippies, we all just wore what we had. I don’t recall ever even looking at sneakers.

That was my first encounter with that sort of abuse, at Wade Junior High School 117. Never before had I been taunted for having cheap clothes or sneakers. The next day I wore another pair of sneakers, these were called “Jox” I believe. Well, those too got me ridiculed by this goofy kid name Anthony. Anthony who was in no real position to tease or pick on me also recruited others, and the chorus of abuse came forth once again.

Before then, I had never requested any fancy sneakers from my mom. But after that, I did and momma bear always did her best. Mind you, we were on welfare and quite financially limited. Still, she somehow managed to get me those Nike Air sneakers with the blue swoosh. A nice pair of “cool” sneakers that some trash kid would unsuccessfully try to steal from me! It was a lose lose situation. If you didn’t have anything, they mocked and cruelly teased you. If you had something they tried to rob you. Those were some rough times back then. These kids were bad, and despite any excuses we make for them nowadays, there behavior was downright criminal.

So one year my uncle had come to stay with us for awhile, and during one of his visits I saw his sneakers. I remember seeing that he had no insole inside the sneakers, and this is how he wore them. I asked him why he didn’t get a new pair and he said he couldn’t afford them. Back then I didn’t understand or appreciate how broke one had to be in order to wear sneakers without insoles. I was too young and didn’t know what his financial situation was like. This particular uncle, Cai was his name, he was a karate man and I loved him.

Of all the uncles I briefly met, he was the only one I became close to and actually cared about. I met others, and I think they were cool,  but we never formed any relationships. So of course, the one that I cared about, he died some years later in a car crash. I was devastated about losing him, it hurt me quite a lot. But I never forget his sneakers, and every time I begin to act like an entitled prick, I think back to those times and how we all struggled in life. This perspective gives me a reality check and I understand that I am blessed and I should be so difficult.

These are life lessons that I try to impart on others, especially my son who is version 2.0 of myself. He doesn’t have the perspective that I do regarding those past experiences. I try to share them with him, but I don’t think he quite gets its. Without having lived through it, it’s hard to get someone to understand. Especially when they have never lacked for anything due to the hard work of their parents. I can only hope that as he continues his journey into manhood, that through his own experiences he’ll understand that he is very blessed too.

So the bottom line here is that I’m keeping the sneakers.