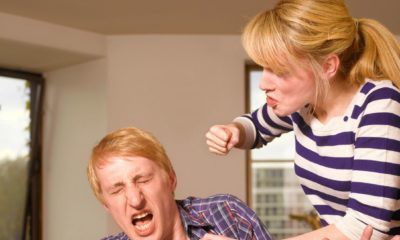 I was walking to the gym, and I saw a man arguing with a woman. She was screaming at him and he was screaming back asking her for something. All the while I saw the little man standing there, he was watching his parents argue, confused but trying to appear cool.

Watching that made me sad, and it reminded me of how shitty it felt when my mom and dad would fight. I mean, there were times that they’d get physical with each other. My mom is a hot head and wasn’t down with no bullshit from the old man, and when necessary she’d assault my pops. Not one to be outdone in the hot head department, my dad would retaliate. I never actually saw them hit each other, but I am sure it happened.

Moments ago I just remembered that sometime before he passed away, he told me, “Your mother is a strong woman, sometimes she’d get angry and hit me and it hurt. Your mama is a very strong woman.” The fact that she could hold her own like that kind of makes me smile, but it also sucks that they fought to the point he’d know that about her.

I don’t remember many of their arguments, but one night my pops got so angry at something she was fighting with him about that he grabbed a hammer and threatened her. I felt hopeless and I couldn’t stop them from screaming at each other. My dad had the devil in his eyes so before he could act on it, and in a fearful rage I went and I kicked the front door with all my might while screaming “enough!”

I suppose that the loud bang coming from me snapped them out of it, especially my dad who had the hammer in his hands. I can’t remember what happened after that, but I’m sure it ended up with my dad sleeping on his little blue and white mattress outside of the apartment on the stairwell that lead to the rooftop.

In any case, I saw a police officer come over and intervene. He told the man “Sir, just walk away.” The guy said “I can’t let her go, she’s got my I.D and I need that!” The woman then began to walk away with the child, the man repeated, “Officer, please stop her she’s got my I.D.” But the cop told him to “walk away, sir” again.

I don’t know if he was being truthful about the I.D, but I don’t think it was cool that the cop immediately sided with the woman without having all of the details. He should have asked her and checked to see if she actually had his property.

On the other hand, he could have been lying and she was terrified and wanted to get away. Though based on the totality of the situation I observed, it appeared to me that she either picked him up after being released from jail, or they came from a court appearance together for some reason.

In any case, the point of all this is to say that you shouldn’t fight in front of your kids. Unfortunately, situations like this traumatize children, and though it may fade, the damage that is done lasts a lifetime. If you have disagreements, do your best to behave like adults and address them in a civil fashion. If you won’t do it for you, then at least do it for the kid.