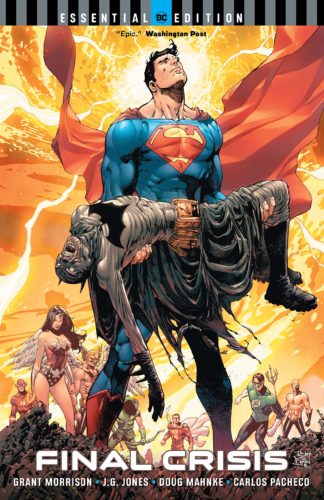 You know, I’ve been told that if I don’t have anything nice to say, that I shouldn’t say anything at all. Though that can be effective in life, sometimes you gotta let it out.

Anyway, so I’ve been trying to get into DC comics, and so far I’ve not have any luck with their books. I love Superman, Batman, and other characters from the DC universe, but for some reason, the comics don’t grasp me the way others do.

Most recently I tried to read Final Crisis, that cover looks amazing and caught my attention. The story and potential seem amazing as well. But this comic, though nice looking in quality and pictures, when it came to content was confusing as heck. There were like at least 5 different stories happening at the same time, and it wasn’t flowing or congruent. It really felt like I was jumping from one comic to an entirely different comic that had nothing to do with the other.

From the very first few lines talking about shadows on earth or whatever, nothing is clear. I still don’t know who the hell was the one saying that. Was he the one claiming to know God, was that guy working for him, was that the God who was killed? I mean, yo, I have no idea what the hell was happening.

It only continued getting more and more complicated from there. After a few pages I got so frustrated and just put the damn comic down and gave up. I proceeded to return it and remove it from my comixology account and put up a Facebook rant about it.

Shortly thereafter one of my knowledgeable comic book buddies told me, “I could have told you not to read that one, Angel.” Seeing as though he engaged me on the topic I decided to ask him to recommend a DC comic to read. He told me that he stays away from DC titles because they are all too confusing to read. Now, I haven’t tried to read too many of their comics yet, but based off of this initial experience, I’m inclined to agree with him.

I am open to suggestions though! So if there are any DC fans out there, (of the actual comics cause I do like the movies and animated works too) what would you recommend I try reading? Next up I was gonna try DC Rebirth, but I haven’t started it yet. Do you have any recommendations? I’m open to reading their work as I’m a fan of the characters, but it just hasn’t started off well. You can still save them though!