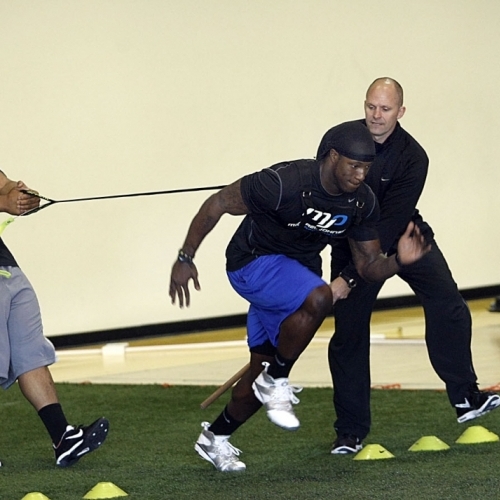 He’s quite a heavy guy. He told me that he’s just getting back into fitness. Yesterday he took my High Intensity Interval class. As is to be expected, he was struggling throughout the entire session. I frequently walked over to him, patted him on the shoulder, and kept repeating phrases like, “Good work. Push it brother, push! It’s you against you today, show your body who’s in control.”

After the cardio portion, we moved on to floor work. As I had the group doing sit-ups, he got stuck. Knowing that he requires a bit more motivation than the others, I quickly ran over to him, I grabbed his feet for support and I encouraged him to keep going. He was about to quit and make an excuse, but he saw my eyes and my expression. He didn’t continue that route, and then he said “It hurts.” Not one to take unnecessary risks, I asked him “Is it soreness, or are you injured?” He said, “It’s neither, I’m just too tired.” I looked at him, tapped his shoulders while holding his feet and I screamed, “Don’t quit! Separate yourself from the pack! Do it now! Separate. Separate. Animal. You are an animal. Push. Push! Arghhhhh. Ayyeee… Push it bro!”

He went back down on his back. I saw the fire in him, he committed, he would not give up on these last 5 sit ups. He screamed as I do, he pushed himself, he screamed again, and he did the five more sit-ups. He didn’t give up, and he did it!

Everyone was watching us now as they had finished their set of sit-ups. They all saw what was happening there, and they all clapped and cheered for him cause he did it! He was so happy and excited! He jumped up and screamed, “Yeah!” I was super excited and happy for him too.

Folks, do not underestimate how important these mini victories are in fitness! Each sit-up puts you one step closer towards your goals! If you weigh 300 pounds, you will never reach 180 without first going through 250! Mini victories add up to big ones! This set of sit-ups felt like a victory for my buddy, and I’m glad that I was able to help him last night.

Do whatever it takes and you can be the difference in someone’s life! Be careful when looking to touch participants, asking for permission is a good idea. In this case, I made a judgement call and took a calculated risk. Turns out it was a good idea, but he was a male. Be especially careful making any physical contact at all if you are male, and they are female. “May I support your feet?” Also, be careful when hooting at hollering at people, some of them don’t like that.

All that being said, when you genuinely love what you do, the participants will know! They will be inspired to return, they will push harder, and they will succeed. They know that you really want to get them there, and they will walk, run, sit-up, and jumping jack with you the whole way with you.

Please take note of the date on a post. Over the years my views have evolved. I'm constantly learning and growing.
Related Items
← Previous Story Pedophile At The Park
Next Story → Who is James Zwerg to Black America?
Subscribe
0 Comments
Inline Feedbacks
View all comments