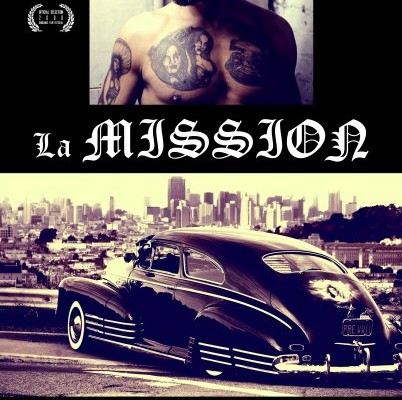 I’m positive that you all have in one way or another been exposed to the same-sex marriage debate that is happening right now. Many people have changed their social media avatars in support of marriage equality, while others march and protest on the streets. It is such a big topic that is has recently made its way to the Supreme Court of the United States of America. That being said, let us ask the question: “Where do most Latinos stand on this topic?” Particularly Latino men who have traditionally been seen as macho and tough guys? Read on for my review of this gay latino film, la mission.

When I was growing up in the South Bronx, calling a man “gay” or using other slurs was one of the biggest insults you could say to him. Lives have been lost and people have also been badly injured over those words. That wasn’t all though, a man being perceived as “feminine” or “soft” was also as good a reason as any to victimize them. It happened often. Even today with these “knockout games” these punks play, gays are targeted because they are perceived as weak, unable or unwilling to fight back. I’d like to say that times have changed, but there is still plenty of work that needs to be done.

For example, just today the HuffPost published a troubling story about a Peruvian father who allegedly set fire to his gay, HIV-postive son:

A Peruvian father faces allegations that he doused his son with gasoline and set him on fire after learning the 22-year-old was gay and HIV-positive.

According to the Peruvian daily newspaper La Región, Hitler Baneo Núñez, 49, allegedly tried to burn the victim (identified in reports only by his initials R.B.P.) alive after becoming tired of neighbor’s jokes about his son’s sexuality.

Though neighbors helped save R.B.P., the young man ended up with his face, arms and parts of his legs burnt, according to the report. Not only is R.B.P. HIV positive, he also reportedly has tuberculosis.

It is in this context that I want to talk about the the Latino-based movie “La Mission.” In 2009, before the gay rights debates were getting national media attention, before Presidents and Vice Presidents were showing there support, Peter Bratt brought us “La Mission.”

Don’t forget to read Charlie Vazquez Memoir on being Gay, Latino, and in NYC!

The film stars Peter’s brother Benjamin Bratt and Jeremy Ray Valdez. The story revolves around a reformed ex-con named Che Rivera who is as “old school” as they come and how he is raising his son as a widowed father in the Mission district of San Francisco. The twist? His son is gay.

Che Rivera has the respect of the streets, everyone knows him and regards him as an “old school g.” In addition to his street credibility, Che is also admired and sought out for his amazing skills hooking up those awesome low riders. On the other side of the spectrum, Che’s son Jes is a good student on his way towards a successful life. Everyone knows him, and knows his father is Che. His one major obstacle in life is not so much the streets, but that his father does not know about that he is gay.

That is until one day after sneaking out of his house to “study,”Jes forgets about a picture he took with his blanquito lover at a gay dance club. His father finds the “incriminating” photo, and this sets the tone for the remainder of the film. As one would expect, “the old school g” 100% disapproves of his son.

During an argument, he proceeds to promptly beat the living daylights out of him in public while disclosing and attacking how he feels about gay people. They get into a huge street fight where he curses him out, and outs him in front of the entire neighborhood. As if the kid doesn’t have enough to deal with in life. Eventually Jes moves out of the house to escape his father’s abuse.

Later, while walking the streets, Jes is called homosexual slurs and ends up getting shot for being gay. Even then the stubborn old man could not accept his son. He goes so far as to threaten his lover’s life at the hospital while visiting Jes. Che’s love interest Lena witnesses as Che has the young man by the throat against the wall. She walks out on him. This leaves Che alone to deal with his demons. Che misses his son’s graduation and Jes goes off to college. Finally realizing that he has to change, the film closes with Che driving a low rider for his son to the college campus.

This film is extremely powerful and I highly recommend it. “La Mission” deals with this topic in a very real manner, one that I could easily see happening today in any old school Latino household. The lessons taught here are extremely valuable. Do yourself a favor and watch this film.

This post was originally written for my friends at LatinoRebels.com

[…] is reality, it may not be politically correct, but this is the truth. This is extremely true for us Latinos, the example above is not […]