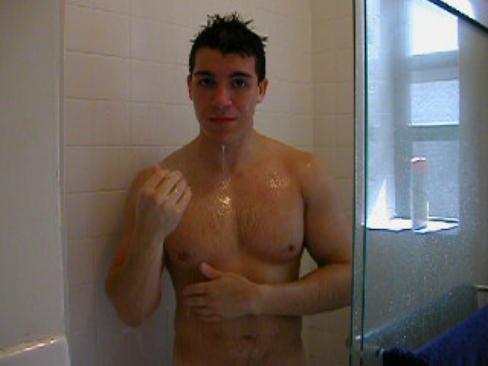 I had just finished my workout at a gym in 42nd street. It was a weekend and I was headed over to shower. That’s when I saw these two guys having sex in the gym shower.

As I passed by their shower stall, I saw one dude on his knees, he was sucking on the other guy’s penis like it contained the elixir of life. Cool, so he looked right at me, as did the recipient of said blow job. They were waiting for some reaction from ghastly reaction from me, but I simply said, “Sup” nodded and kept walking.

Mind you, it’s not that I’m used to seeing guys give each other blow jobs in the shower, it’s that I’ve lived in NYC all my life and nothing surprises me. So though I was slightly thrown by it, that lasted less than half a second and I doubt anyone other than myself could have perceive that response.

I continued minding my own business, grateful that I always wear flip flops and entirely aware that this was probably a regular occurrence at any gym in the city. Sure, it’s not cool that you are possibly showering where some dude may have jizzed after getting sucked off, but do you really think you can stop it? It’s a private area and it’s NYC. Deal with it.

Anyway, I showered and on the way out I once again passed by these guys. This time, one was bent over and the other guy was behind him and thrusting his penis deep into his backside.

As I continued walking out, I wondered if I should report this. I mean this can’t be a sanitary practice to other gym goers! But I simply didn’t care enough to bother making a stink about something that will probably continue to happen. Let’s just say that I got those guys in some sort of trouble, okay? What’s the worse thing that could happen? Maybe they’d get booted from the gym? Then what? Next week someone else would be banging or jerking off in the shower, whatever. We know what it is.

I know what’s up and if it’s gonna happen regardless, why ruin their fun? There are already more than enough assholes who will harass them simply for existing. I know that banging it out where we shower is not cool, but why be a jerk and interrupt the party? Meh, like I said, it doesn’t bother me enough and I simply don’t care.

Is it sanitary? No. Is it cool? No. But is it that big a deal? Meh, maybe to some, certainly not to me. Go ahead and have sex to your heart’s content, you won’t encounter any beef or hate from me. I’m super easy y’all.

Anyway, as I walked out, I said, “Y’all living the good life!” The one going to town on the anus winked and nodded at me invitingly. I chuckled and said “Not my thing fella, thank you though. Enjoy.”

And with that I left the gym.