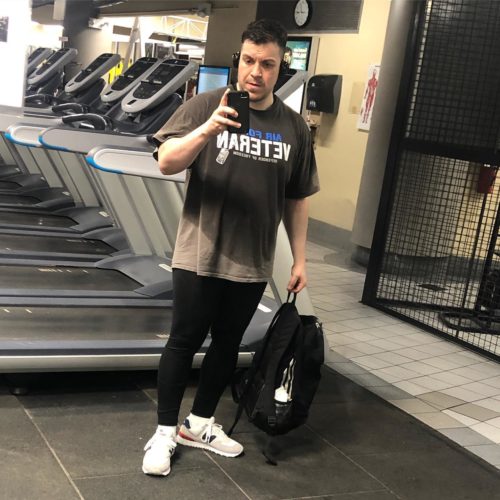 A few days ago I was in the city to eat with my son and my little sister. Afterwords, I got a heavy urge to take a vicious dump. So my son and I started walking towards one of the 24 Hour Fitness gyms in Midtown. When we had exited Blue Smoke, we saw one of our servers and a gentleman speaking. I had nodded at both of them and kept walking.

In any case, as we walked towards the avenue to hit the gym, I heard someone screaming, “Veteran, Hey Veteran!” I looked and saw it was gentleman who was speaking with our server. He flagged me down and said, “I’m a veteran too man, I’m trying to get a few dollars together to get a room and a shower at a hostel. It’s hot out here and I’m super nasty. Can you help a fellow veteran out?”

To show me that he wasn’t bullshitting me he went in his pocket and pulled out a VA card. I decided to give the dude the full cost of the hostel. He said thanks and seemed grateful, but he said, “Hey man, I don’t want you to feel sorry for me. I’m just going through a bad spell, I’m a hard working man.” Realizing his pride was hurt by having to ask for help, and knowing that every day many veterans takes his or her life, I decided to engage this man a little more.

My son and I both had to drop a load, but I held a conversation with him for sometime. I asked him questions that I already knew the answer to, but I wanted him to feel like he was somehow helping me. I figured if he felt that he was somehow contributing some information that may help me, it would help him reconcile this with the help I gave him? I don’t know folks, maybe I was overthinking it, but I wanted him to feel useful because he was a bit down on himself.

We spoke for a while and he gave me a bunch of information about the VA, getting a VA card, as well as medical benefits from them. At the end of the conversation we shook hands and each went about our business. I know this doesn’t sound like a big deal, but I want to believe that his contributions, though I didn’t really need the info, would make him feel like he accomplished something and maybe raise his spirits.

When we left, my son asked me why I spoke so long with him about something I didn’t need. I told him, I don’t know if I did the right thing, but my objective was to make a man who is feeling down feel like he’s got worth. You and I know he’s got value and worth, but I wonder if he knows it? I wanted to take a few minutes of my time to remind him that he does. I hope I accomplished that mission.

None of us are perfect, and I’ll be honest with y’all, earlier that same day, I walked by a guy who had a cardboard that said “Veteran.” I nodded at him, but I did nothing further. I felt kind of bad about that, and it would seem that the universe gave me an opportunity to make it right. I hope I did.