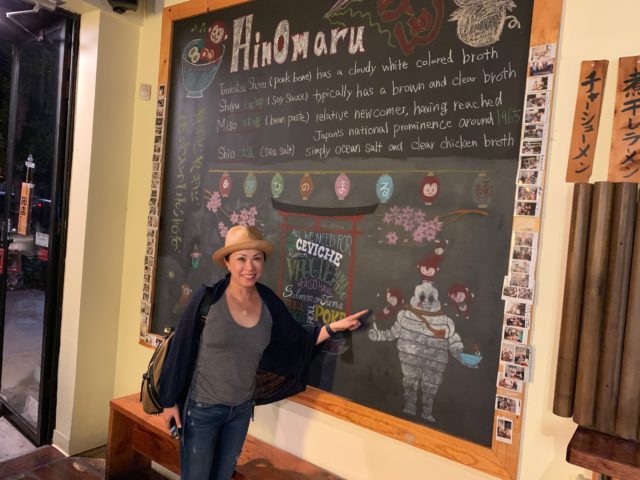 My wife loves ramen, myself I can do with or without it. I have nothing against it, but I’m not obsessed with it either. However, this weekend was my wife’s birthday, as such I wanted to take her to eat one of her favorites foods, Ramen. I spent a few days searching around for a spot to go eat and found quite a few notable ones, including this one here. HinoMaru Ramen is in Astoria Queens, that made it an easy choice. Still though, I wasn’t going to take her a convenient but crappy place. This spot here has a michelin star and any foodie knows that this is generally at least a very good indication that the food doesn’t suck. So this place was convenient and recognized as a top restaurant too? Sounds like a plan to me! Combine it with the Museum of Moving Image and you have yourself quite a nice birthday outing!

It doesn’t appear that they take reservations, but judging by google’s business predictor for restaurants, I wasn’t worried on an early Sunday evening. We were able to walk in and be seated immediately. As I’m thinking about it now, I’m getting hungry and want some more of that food. It was damn good. First they started us off with some water and drinks. I went with a lychee smoothee and the lady got a yuzu soda. Both were pretty delicious. Though I wish they gave me a longer straw for that tall ass glass! One of the appetizers we had was the rock shrimp, it came with some sauce, scallions, and little corn bits. It was perfectly crusty and oh so good! I could go for some of that right about now, but I’ll have to make due with a protein bar in about half an hour. Thems is the breaks my friends, thems is the breaks. While we were eating the rock shrimp, these perfectly soft and succulent ribs came out. They practically slid of the bone, that’s how soft and tender they were! Yum, yum, yum! Seriously, I’m going back there very soon! We both had a ramen dish, obviously. So I had the spicy one. I know that doesn’t make a whole lot of sense since I don’t have a high tolerance for spice, but I wanted to try their signature dish as it was meant to be eaten. Needless to say, there was a lot of sweat to be released, but the dish was so good. I really enjoyed this place. The staff was attentive and professional. They weren’t over the top friendly, but who needs that anyway? Just be courteous, bring me my food and be professional, I’ll be a good customer and everyone is happy with the transaction. This is all that matters. The food, the drinks and the ambiance were all good. I really intend to go there again very soon. Highly recommended ramen gem in Queens!