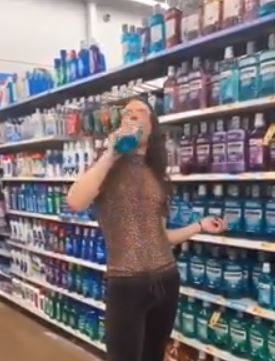 Some days ago I wrote in favor of being lenient with the young lady who took it upon herself to lick some blue bell ice cream at a Walmart. I wrote that off as a “young and dumb” moment by a kid. I stated that she should be given community service, a fine, and put on probation. But I was not in favor of destroying her life and making her a felon over a stupid prank.

However, since that video went viral we are now seeing more and more idiots out here copying her and doing similar food tampering. My generosity only goes so far.

In the featured image above you see a person taking some listerine, gargling and then putting it back on the shelf. Now that one makes me nauseous. This is not just some ice cream licking! Listerine specifically has to do with cleanliness, health, germs and bacteria. That’s just straight up disgusting. I hope you are caught you nasty beast. On this other one you have an old ass adult licking a blue bell ice similar to the young ice cream licker. However, this is no child and they should definitely know better. Since you think it’s all goodie, you too deserve some jail time you multilicking buffoon!

Okay, yes I said that we should let the original ice cream licker slide because she was young and dumb. But now with all these copy cats, so far I’ve seen these two of them, these dumb idiots don’t get a pass from me. They are doing it because the ice cream licker got exposure and now they are trying to get down on that bandwagon. They figure since she got away with it, that they too can get away with.

This is the problem with being nice and giving people chances in life. If you do that, then others think that they can get away with the same thing. Well screw that crap. These stupid copycats need to spend some time in lockup. We let the first one slide, but now its time to make an example and set a new bar of consequences for this disgusting behavior. The first kid was lucky, but in my opinion, any others that surface should be jailed for at least a month.

What are your thoughts?

Jesus, I don’t even want to live on this planet anymore. WTF is wrong with people?! I’m with you, throw these idiots in jail and set an example so no one else is compelled to copycat.