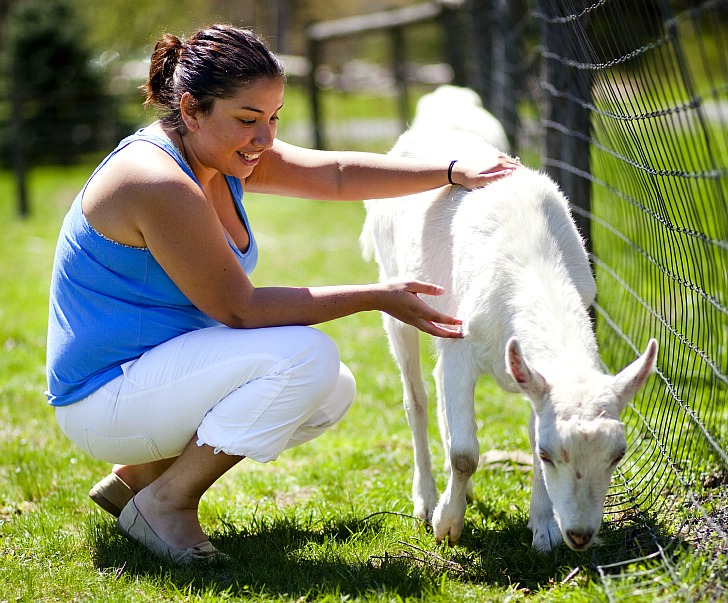 First of all, I am a meat eater, a carnivore of the highest order. I am far from one of these new age types that wants to resonate with the universe and all that good stuff. I have no problem with people like that, and I want to achieve balance and spiritual bliss, but I’m not one of those non-meat eating types. What I am is a reasonable man that can acknowledge when something doesn’t seem right.

Yesterday my wife was watching this documentary called “vegucated”, basically it is a film chronicling the conversion of some meat eating people to a vegan lifestyle. The movie covered the health benefits of being vegan. They cited various statistics such as “people that eat a higher concentration of greens and legumes have a lower risk for cancer and heart disease.” It also covered the different places you can go to eat vegan all over the city. Another item that it covered, the one I found most troubling and will be the focus of this post was the way the animals we eat are treated according to the documentary.

I know that if we are going to kill and eat these creatures, they have to be rounded up and kept somewhere. I know that eggs have to be harvested and laid. I know if I’m eating a hamburger that a cow was killed. What I didn’t know is how terribly these animals are treated while alive. It’s troubling to say the least. Chickens, baby chicks, sent along a conveyor belt as if they were simply a product. Male chicks discarded like garbage. Cows impregnated over and over so that they can continue producing milk. I mean the whole scene was very, very troubling. Quite unbelievable that a human can be so cruel to these animals.

Standards for the treatment of these animals are very low, and shady at best. It’s quite sad to see. At one point one of the women on the film was shown talking with and asking questions over the phone to a farm manager or something, along with all the terrible conditions, he said the animals were killed with an electric water shock to the head. I know that eating meat contributes to this, and no I do not foresee myself stopping eating meat anytime soon. However that doesn’t mean we can’t talk about this topic.

I will admit that I have a conflict with this thing. Because on one side of the coin I see the animals as food, and I recognize that we are simply going to kill and eat them. On the other side of the coin seeing these animals treated so badly, like factory products just doesn’t seem right. So what are we to do?

I understand that these farms are simply in it to make a dollar, they don’t care about the way the animals feel or are treated. Money talks, bullcrap walks. They just want to make more
and more money.  They will use and reuse each animal for as much profit as they can and then destroy it or cook it too. But there has to be a line, I mean how cruel is acceptable?

I do know this, what I saw was really bad. Something that I wasn’t aware of, and I didn’t really give it much thought in the past.  But it just doesn’t seem right to me that simply because we are going to kill and eat these animals that they should be treated so terribly. At the end of the day, they are still living creatures and they feel and suffer. For instance, pigs, pigs are social creatures and quite intelligent. They know what’s happening and they suffer. It just doesn’t seem right.

What are your thoughts on this topic? Is going vegan the answer to stopping this terrible animal treatment?

Have you ever seen how they slaughter pigs? Once you see that, it’s tough to think that’s OK.

Scott, I have not seen it completely. They did show how they treat the baby pigs and it’s really terrible. But what right to judge do I have when just yesterday I ate some pork chops?

I know. I was trying to give up pork products, but for the past 5-6 months I’ve been getting sick really often. I’m not sure what’s causing it, but I know that meat is not the culprit. That means that I’ve been eating a lot of meat. One can only stand so much chicken.

The clip that I’m talking about is in a movie called Vegucated. You should be able to find it on Netflix or Hulu.

That documentary is what prompted this post man! Read the damn article! Dammit Scott!

OK. I read the article. I feel like, if you expect that I would read the full article before expressing my opinion, you should hold yourself to the same standard and watch the full movie to have an informed opinion. (I would also suggest watching Food, Inc.) Your comments implying that the farmers are greedy seem a bit harsh. Farmers don’t make nearly as much money as you might think, and typically treat the animals the way they do because the meat processing plants require it. As an example, you may have seen that chickens are packed in buildings with… Read more »

You should check out a documentary called Farmageddon if you want a glimpse into how much pressure farmers deal with.