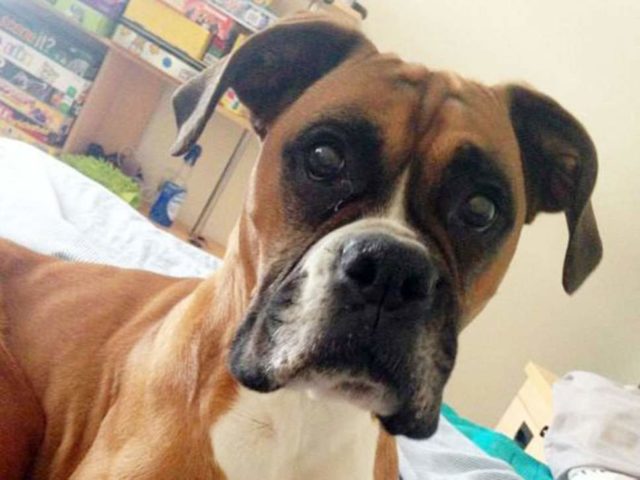 I came across a meme on facebook that stated a woman left her pet boxer locked up in a kitchen, with no food or water for days until she died. I didn’t believe it was true, so I looked up the story, turns out that the story was true.

This beautiful, 5 year old boxer suffered a horrible death due the disgusting negligence of her owner. The dog’s last few years of life sucked, but this beast made sure that the end of her life was even worse. Imagine being locked in a room with no food or water for days on end. They said that this dog died and suffered over a 6 day period.

They said that the woman was depressed or whatever, frankly, I don’t give a fuck. I have no sympathy for her, and I don’t care what mental or emotional bullshit she was going through. Anyone who does this to an animal deserves to be punished severely. A fate this beast escaped, Katy Gammon received only 18 weeks of jail time, and a lifetime ban from owning a pet for this crime. This is an old story, but I can only hope and pray that during those 18 weeks she suffered at the hands of animal loving inmates. I hope that she suffered and is scarred for life. Nothing would give me greater pleasure than to subject her to the same type of suffering and death that she inflicted upon this poor dog. At least while she suffered she’d know why she was being tortured. This poor dog, through no fault of her own, and without understanding as to why, died a horrid death. This story makes me angry to no end, and I hope that even to this day, this beast Katy Gammon is suffering. I hope that she suffers until the end of her days. Damn beast! Please let her be mauled to death by a pack of wild, rabid boxers. That would be beautiful.