Home / DNR / Who is James Zwerg to Black America?

Who is James Zwerg to Black America? 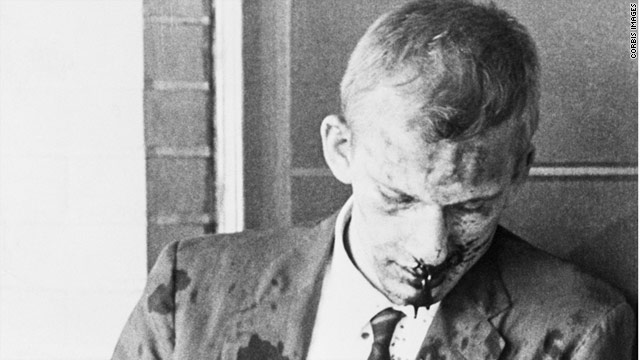 This morning, I woke up a bit early. It sucks, but if I go past 7 or 8 hours of sleep, I get upper back pain that wakes me up. So, I started to browse my social media, and came across the name James Zwerg, and how this white male was relevant to Black history. I don’t simply take Facebook snippets at face value, so I began to research his story and found that the snippet was true.

James Zwerg is a white man, and during his college years he joined The Freedom Riders. Being a white man, it was not common that he’d join such a group, and it was even less common for him to walk face first into a mob of angry, racist, white people in Alabama during a freedom ride. But that is exactly what he did, and as expected, he got beaten to a bloody pulp while being called a “n*gger lover.” Zwerg, pictured above with fellow rider John Lewis was about non-violence, and as they beat him mercilessly, he prayed to God for strength to survive this, and to forgive those who did it.

Personally, I could never understand that mindset. I am anti-violence, but I’m not willing to let anyone beat me down for a cause. If we gonna fight, it’s gonna be a fair one, and I’m hitting back. But, maybe that’s what separates guys like me, from guys like Zwerg? I would have came out that bus swinging!

His actions as told in John Blake’s 2004 book “Children of the Movement,” inspired many other black folks to join the movement. I suppose that the logic would be, “If this white man took this near death beating in order to help us, who are we to sit this out?” This was explained to him by a black freedom rider as Zwerg was moved to tears for seeing his own portrait in a museum, while many others who were not white would never be known to history. “I’m there because I’m white,” to which the black freedom rider replied, “Your words from that hospital bed are what mobilized many of us to join!” Zwerg was at odds with his parents, particularly his dad who didn’t seem too fond of blacks. His mother as well, but allegedly more so because she worried about her husband’s health. This caused him all sorts of problems after it was all said and done. Alcoholism, commitment issues, and even contemplating suicide.

Zwerg is now 77 and lives in Arizona. His name came up, and I thought it was worth sharing. This was the first time I heard of him, and I’m sure that many of you will feel the same way. In any case, kudos to James Zwerg, he was a white man standing up for the civil rights of black Americans when it could literally cost you your life.