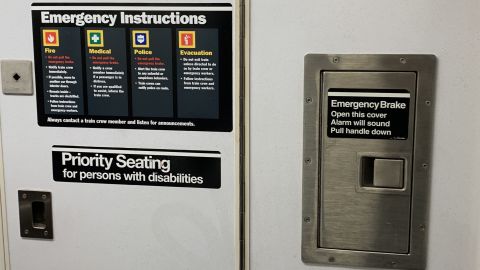 This homeless guy pulled the emergency brakes to cause delays!

As the train pulled in, I saw what appeared to be a homeless guy reaching his hand around the area where the emergency brake is. He looked kind of shady with what he was doing, but I just figured that this was a sketchy dude. I didn’t truly perceive what could actually be happening and I kept walking towards the next car as it leaves me closer to my exit.

Then when the train stopped, I saw that jerk pull his hoodie over his head and leave the train car quick in a hurry. Next, I hear the conductor state that the train was being held at the station because the emergency brake was activated. Never mind that the train wasn’t even moving, so I’m not sure what pulling the brake should be doing then, but that’s when I knew that this jerk had pulled the emergency brake back when I saw him acting shady. He did it intentionally in order to cause this delay.

Thankfully, it only took about 5 minutes for the conductor to sort this out. I guess that this “man” is so miserable with his existence that he takes pleasure in this petty, yet rather annoying, childish behavior. What an asshole.

In any case, I think that it is a problem that a guy like this can so easily cause this level of disruption on the train for his entertainment. That is a safety hazard and should be looked at. Knowing that any nut can simply detain the subway car at will is a major design flaw. Remember what happened a few months ago on the train? The shooting? This needs to be looked at and sorted out by the MTA.

What bugs me out is that I saw him setting up to do it. But I keep asking myself, even if I saw it happening, is it worth the hassle of detaining him over that? Would I end up getting arrested over it? Stabbed? Etc. I think it’s not worth the risk. We just need to prevent it from happening in the first place.

Juvenile great white shark washed up in Long Island Beach
Factor Meals Scam: Did you get a bunch of random phone calls and texts?