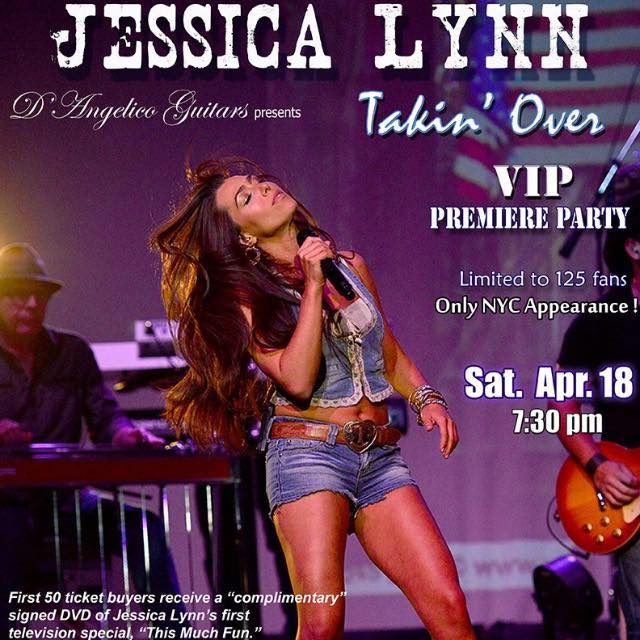 Yesterday I had the honor of attending Jessica Lynn’s musical VIP event at D’angelico’s Guitars. All I can say is, no one’s having this much fun! See what I did there? The first time I heard a song by Jessica Lynn was on the internet radio station, TRS247. As soon as I heard the song “This much fun,” I reached out to Cris and Alysia to find out who that singer was! I know it’s not normal for a guy from the Ghetto in the South Bronx to like country music, but it also isn’t “normal” for a woman raised in Brooklyn to make her mark on the country scene! So, I guess we both refuse to live by the rules around here! What you gonna do about it?

In any case, once I found out who she was, I made contact, and I have been following her music ever since. As a fellow artist, I can appreciate that many of us are out there, hustling and grinding, and putting the work in. I can also appreciate that there are many artists who are very talented, I’ve met some amazing artists.

There are times though, when it’s different. You hear, see, or meet a group of performers and you say “Holy crap, these people are beyond amazing.” You see them on the grind, just like the rest of us, regular folks trying to break into a very challenging, difficult space. But something’s different. You kind of just feel it! That’s the case with Jessica Lynn and her band. There is something different.

If you listen to most artists, you can tell who’s “signed” or who’s “Indie.” But in this case, you cannot. Jessica and her band are on the same level as any country bands out there. In terms of sheer talent, quality, content, and performance, this band is second to none. As I’ve watched them, I’ve said to myself, these guys now join the very small group of people whom I believe can actually make it in their respective fields. They are just that good.

So that’s the history of how I came to know of Jessica Lynn. So when I saw that they were doing this event, and performing in NYC, I immediately bought my ticket to the show. I was trying to get out to Peekskill for another show, but I ended up missing that one.

This location is supposed to accommodate about 125 people or so, but man, it was hot in there! I was sweating my butt off, the place was packed. When I first saw Jessica, she gave me a hug, and I was scared because I was sweating. So I gave her a hug, but I tried to keep my grossness off of her. LOL. That was probably an awkward hug, and I hope she didn’t think I was weird. Like I said, I was sweating, and I didn’t want to slime the lead performer of the band! That’s what they used to call me back in my fighting days, Slimer, cause I sweat so much I used to leave a trail on the floor as we sparred! Gross.

I strategically sought out the cooler areas, and stationed myself there. When I first arrived, I realized that I didn’t know a single soul here, and I felt really awkward. My social anxiety started to kick in and I wanted to retreat, to just run out. There are few things that makes me as uncomfortable, or self conscious than being at a place, where everyone knows each other, and I am the odd man out. I know it is all in my head, and that’s why I didn’t run out. I stuck around, and by the end of the evening, I was making friends all over the place. I arrived a little late because of the stupid train, but given my sweating situation, it worked out okay. Had I arrived at 7:30pm when the doors opened, I would have been dripping for hours! Fortunately I arrived shortly before the live concert began. Jessica and the band took to the stage, she was introduced, “Ladies and gentlemen, thank you for coming, when she fills up Radio City, you’ll be able to say you were here!” and they went to town on the music! They performed some new songs, and some old favorites.

Those guys are amazing performers, they have dances set up, I didn’t hear a single mistake from any of the instruments, they are relatives, and last but not least, they have Bob! Who is Bob you ask? Well he plays the pedal steel guitar, one of the signature instruments that can dictate whether you are listening to a pop song, or a country song. I don’t know how to describe it, but you know what I’m talking about, that country sound yo, you know! That sound!

I was able to chat with Bob for awhile and he told me that he was one of the later additions to the band. They said they were missing something, until he came aboard. Well, of course! If you are country band, you gotta have that sound, you know, THAT sound! Haha. Bob told me that the band is very friendly to his instrument, which helps it stand out. I like Bob, he’s one cool cat! Jessica’s performance is on par with any rock star that you have ever seen. She’s very entertaining to watch, she’s beautiful, talented, energetic, and really does her best to put on an amazing performance. Even on a night like yesterday where it was hot as heck! She did mention being at an unconditioned event that went up to 109 degrees or so! That’s intense! Oh, I don’t want to forget this, she’s also very nice and humble. She speaks proudly about her hustle, and she’s on her grind, but she’s grounded, and simply amazing.

As the evening progressed I met Jessica’s parents, fiancee, and most of the band members. It was a great honor to meet and get to hangout with such talented and really cool folks. They were very nice and welcoming to me, and by the end of the night, we all knew each other’s names. It was a completely different story from when I first arrived and I felt all weird and uncomfortable. Shyness is something that I still struggle with, though many people have a hard time believing that. Especially considering that I’ve done TV, music, underground cage fighting, the military, a radio show, and go all over talking about politics and the sort. Hehe. I think I throw myself into these terrifying situations as a form of defiance! That’s how I fight my timid nature and force myself to face my fears! But enough about my weird hang ups! Back to the band!

There was some extra entertainment during the event, but I’ll keep that to myself and sum it up with “You had to be there to see it.” I don’t know who’s who, and I’m not going to say nothing. NOTHING! LOL. But if you were there, you got a good giggle at some points.

I took a few pics of the band for Jessica, and at one point played secret security guard for a bit. That’s another story I won’t share, “You just had to be there.” Haha.

This venue has a very nice stage and sound system. Comfortable sofas, a nice bar, and guitars adorn the entire location. I made it my business to steer clear as I am sure that my unemployed butt doesn’t want to take out another mortgage to pay for one of those things! In total I am certain that those things are worth more than my home, and anything I may physically own! Listen up folks, if you like country, pop or rock, and you haven’t had the chance to check out Jessica Lynn’s band, do yourself a favor and press play on the button on the video below! You won’t be disappointed! Go on! Try something new!

Check out the band, and if you want more, then hit up the band’s website at JessicaLynnMusic.org!

I feel bad because I have no clue who she is. 🙁 Great recap. I love the pics you took with her. It’s nice you even met her parents.

Cute story! These small venues need to learn that AC is your friend, even in the cold days. lol!