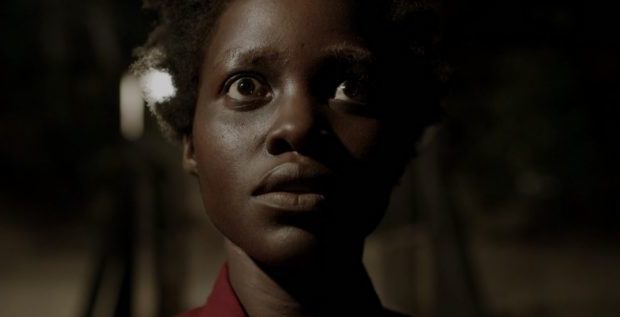 So let me preface this by saying that I enjoyed Lupita in this film. I don’t know any of the other actors, though that dude looked disturbingly like Jordan Peele.

So yeah, I finally got around to seeing “Us” by Jordan Peele. I felt this movie was terribly disappointing. One of my friends said that I’m one of the only people who didn’t “get it.” I intend to read and watch some videos on it, because I’m curious as to what I may have missed.

My son told me that the tethered symbolized the people who don’t have things, while the living symbolized those of us who do and take it for granted. I mean, I can sort of get that, but there are too many questions. I mean, it’s not like the living even knew these people existed, or that they somehow knowingly hurt them. So what exactly is their beef with the living? The living did nothing to them, so what’s up with that?

So if you saw the film, you know the little tethered Lupita switched out with the other one. So does that mean that by being in that basement, the normal girl then becomes the shadow? I mean, they didn’t really explain that and this didn’t make a lot of sense to me. Why didn’t original Lupita leave the basement? What exactly were the tethered, why were they created, and who the hell created them? Why did all those people in red form a line, yet do nothing when the family was dipping?

The biggest part that pissed me off was how damn ridiculous that husband was. Dude, you need to alpha up and fight back bro. Running, limping from a simple bat hit, begging to be left alone, come on bro, fight back and defend your damn family. None of them went in the kitchen for knives, they all just cowered waiting to be killed. Come on now, where are those survival instincts?

Black comedians often say that black people, and even latinos would never die the same way as white people do in horror films. What happened to all that in this movie? Okay, they all survived, but not because they had some superior survival instinct or nothing like that. Jordan Peele let them live, but except for Lupita being strong, and the little boy backing up into the fire, these folks were straight up victims.

I know I’m just ranting ya’ll, but my movie time is limited these days and I had some really high expectations for this movie after watching “Get out.” I felt terribly disappointed, and I’m not the only one. Others told me the same thing, but I guess most people are scared to say it in public because they don’t want to hurt Jordan Peele. I love the guy and I wish him continued success, maybe it’s like my homeboy said, I just don’t get it?