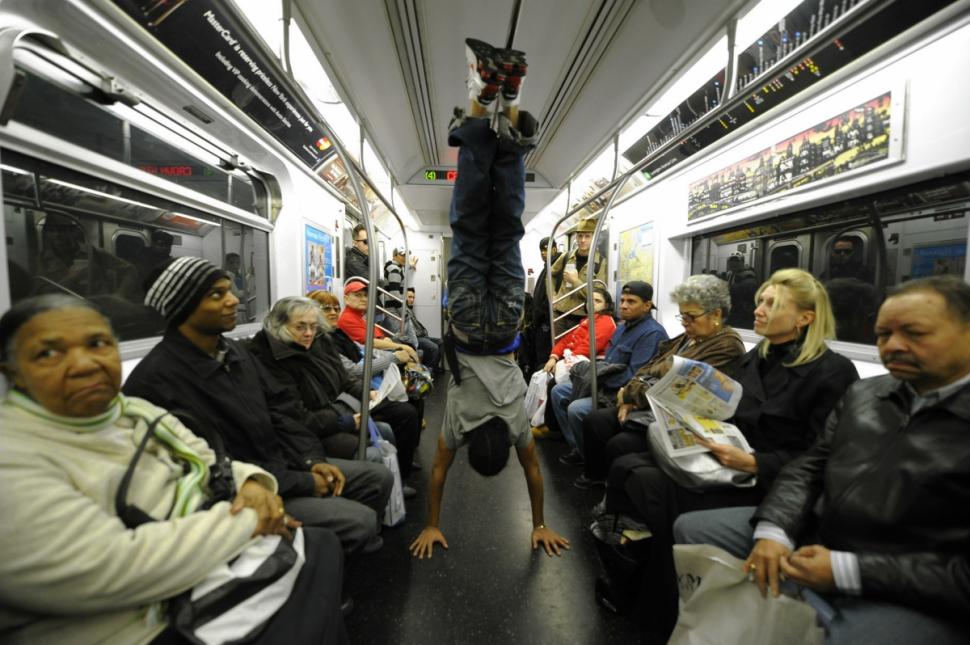 Two young men walk into the subway car. You can immediately tell that they are up to something. What exactly it is, well that’s the question. As they walk down the train, there is a challenging aura about these guys. Yeah, they are definitely up to something.

One of them sits down. The other starts to walk up and down the car, looking at every person. He stops in front of me, twice, and examines me. Now I’m starting to get anxious, and I am mentally preparing myself for anything. He’s definitely up to something, but I just don’t know what. Why the hell is this kid stopping in front of me, and staring at me? Hulk smash!

I start to wonder if they are playing the knockout game? Are they trying to rob the train passengers in between one of these longer express stops? I brace myself because he stopped in front of me a third time.

Next he runs; his boy starts the music, and he does a flip on the train pole. Oh, I see; these guys were looking for any cops. Can you blame me for profiling them, thinking they were about to do something? This is NYC, at 16, you walking up and down a train car? While staring at people? Wearing a wife beater, and covered in skull tattoos? Call me crazy, but we are all gonna get suspicious. I profiled them, just like they were profiling me, because I look like a cop.

Most people remained cool, but one mother with an infant didn’t hide her displeasure about this guy doing crazy flips near her baby. I can’t blame her though, those flips are dangerous, and they can easily miscalculate and kick the baby in the face. Mama bear wasn’t having any of that.

I believe this subway break dancing is now illegal, which explains the back and forth walking on the train, and the checking me out on more than one instance. Although a cop did eventually get on, and he did see them, they were not dancing so he didn’t bother them.

So yeah, you know; just another ride on the train.