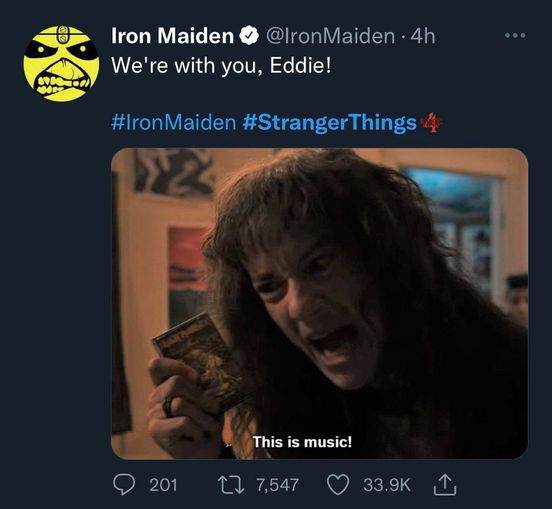 There are no spoilers in this episode. But I think we all know that Eddie Munsen is accused of murder. I demand that on Season 5 of Stranger Things, his name is cleared.

I’m going to try to do my best to not drop any major spoilers on here, but if you are watching Stranger Things, you know that our pal Eddie Munson is in a bit of a pickle. That should come as no surprise given the way he carries on and stuff. But this is far beyond the little hijinks that our buddy pulls.

Eddie is just a rebellious, typical outcast teenager. As a former “rock” guy myself, I can relate. But the fact that he is accused of murder and being sought in connection with those murders, when in fact he didn’t commit those murders, that doesn’t sit well with me.

You would think that by the end of the season, they’d do right by him, and in a way they kind of did, but not really. So I am here to request that in season 5 of Stranger Things, in a very big and obvious way, they clear his name and give this man the respect and recognition he deserves.

Granted, none of the kids are given any exposure for their heroics, especially Eleven who pretty much saves the world every damn season. In fact, she too is criminalized by some psycho military people, but not society in general as the masses are not aware of her powers and doings.

Eddie on the other hand, until the very end of the season is being hunted for crimes he didn’t commit. That’s not right and I demand, I demand that they clear his name in season 5. I want a public apology for the distress that he, his friends at Hellfire, and his poor uncle had to endure. I want not only an apology, but I want them to state how brave he acted and how instrumental his heroics were.

Listen, Stranger Things, you have given us a great series until this point. Please, please, do not go the way of Game of Thrones and ruin it all at the very end. Stay the course with a great show, and for the love of God, clear Eddie’s name in the process! Also, don’t make us wait too long, tomorrow is not guaranteed.