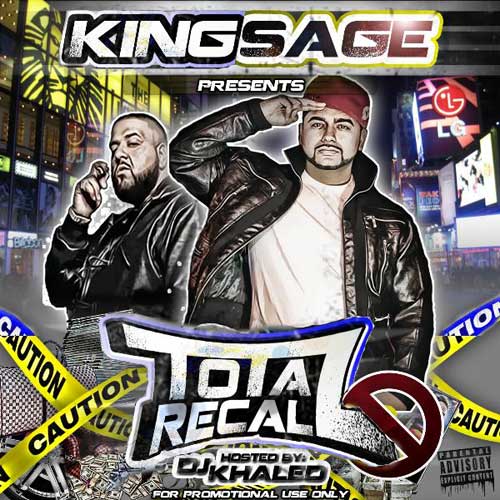 NYC has a plethora of activities to participate in. You would have a hard time coming up with something that we don’t have in NYC. Poets, artists, rappers, r & b singers, dancers, fighters, chess players, traders, you name it, we have it.

Tonight I took a train ride out to Jamaica Queens to work with award winning underground rapper “King Sage“. We worked on my Spanish rap single “Power Struggle”.

Watching Sage in the studio working his magic is an awesome experience. This man has serious skills mixing music. He has a custom built studio in the basement of his folks residence. Recently relocated from a studio in Long Island because it was rather inconvenient and difficult to access.

It’s a nice setup, there is a custom “KS Studio” painting covering one of the walls, several awards are scattered throughout the space along with fliers and other promotional materials. There are a few black couches where you can lounge, and then you have Sage’s computer studio. The actual recording booth is small custom built room within the studio. You feel like you are in a different dimension when you are in there. It’s pretty quiet, filled with sound absorbing padding, a headset and microphone. Dope. Sage guides you and instructs you to spit your fire when you go in the box. “Make it a little more lively, more energy”. Once in the booth you feel like you are totally alone, and except for when I was doing some ad-lib (where I almost burst out giggling) there were no nerves and I felt perfectly comfortable spitting out my rhymes. When you are done with your main verses King Sage gives you feedback and instructs you on what to do next, what’s missing, and what he sees as the vision to complete this piece. “Give me some ad lib, become more enthusiastic, let’s fill in the space.” Once done recording King Sage started playing with the sound effects, filters, edits, and by the end you have an amazing sounding masterpiece. I had a blast working with Sage, and as I grow I’m sure the quality of my work will improve. Considering this was my first time ever in a recording booth, Sage made me sound like a pro. He said “not bad for 1 hour and a first time recording right”. Damn right homie! Not bad at all! Check out the finished product, this song is called “Power Struggle”, by Angel “ARodomus” Rodriguez. It’s in spanish with some english parts, but whether or not you speak spanish, you can appreciate the work we did.

This man is a talented beast. Not only does he have his own work, (check out one of his videos below and a prior piece on one of his songs here), he can take a decent piece of work and elevate it to the next level. Shout out to King Sage!

King Sage has been very busy lately, his work is being noticed by many people. The above video was recently featured in “The Source“! That being said he has limited availability. But hey, you lose nothing by asking for his time. Finally, NYCTalking would like to wish King Sage good luck at the Underground Music Awards, we hope you pull out that “best mix tape award“, your whole album is HOT FIRE! Shoutout to DJ Khaled for his work on the album, as well as all the many talented artists involved. You really should go to his website and cop that mix tape, it’s dope! @SNKNY http://t.co/xNnNOwex Seeing as though you are the beast behind the video, check out this piece on working with @KingSageMusic Peace!

@KingSageMusic @djkhaled Shout out to King Sage for the awesome Power Struggle mix! Check out some of the experience: http://t.co/xNnNOwex

Scott Patricia, what exactly is the question? I can’t answer as I don’t understand.

[…] vision I had for this song. As we were recording the song, us boys in attendance joked around with King Sage (engineer/co-producer) about several things, one of them was how all 3 of  us outside the […]