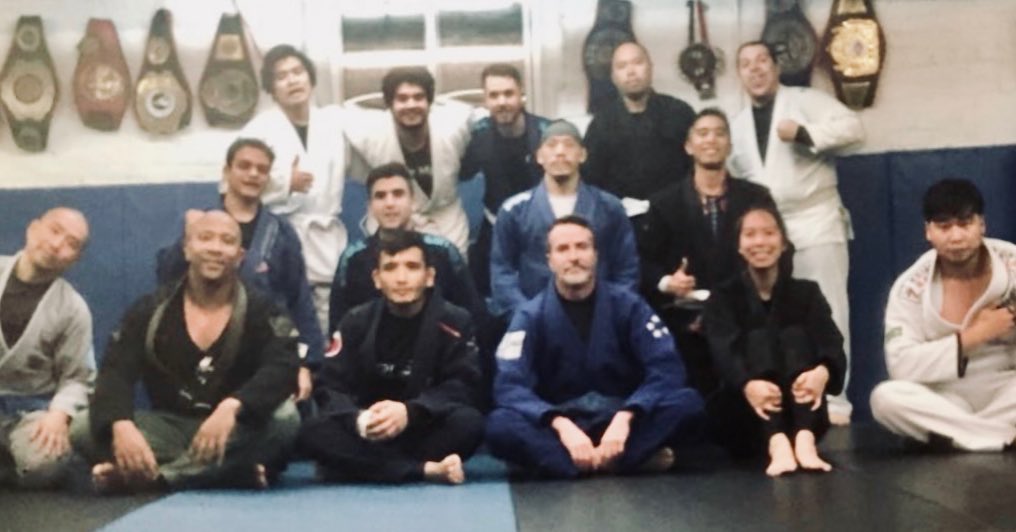 Those of you who follow my work know that I love martial arts and that I have been training in BJJ on and off for a decade and a half. You’d think I would have my black belt by now, like most of my friends, but I’m kind of proud that I’ve managed to stay a white belt this long.

In any case, the off portion is usually due to some injury, of which I tend to sustain many. I happen to be super tight due to a severe lack of flexibility. You combine that with a sport that involves twisting and bending those inflexible joints in the wrong direction and you get me, a middle aged, always hurt BJJ practitioner.

So I am once again trying to get back into my martial arts training after two years off due to a shoulder tear followed by the pandemic. I decided to try a spot that is really close to me and super convenient to get to, the spot is called Kings Combat Fitness.

Unlike my last home, UNA, which was purely a BJJ shop, this gym appears to be more of a Muay Thai fighter gym. As is common nowadays, they also happen to have a BJJ program. But with only two BJJ classes a week, it is no secret that the main focus here is Muay Thai.

At some point, I do want to try their Muay Thai classes, but as a guy who can’t kick above shin level, I’m a little reluctant to go there. As an added bonus, they also have a pretty neat looking strongman and boxing program there.

Their BJJ program is run by a two stripe purple belt named Antonio Elepaño. Coach Antonio gets his training under team Fabio Clementi. My first impression of the program was positive. I went to train for the first time in two years last week.

Coach Antonio as well as most of the team were super cool and welcoming. There were one or two guys who seemed a bit guarded and apprehensive about my presence, but I totally understand that. I mean, they are probably thinking who the heck is this random old guy with 3 stripes on his white belt? Where is he coming from? Is he cool? Is he a spy? Is he an ass? Etc. LOL.

Aside from that weird vibe from those two guys, pretty much everyone was super welcoming and friendly to me. That’s usually the culture in BJJ, everyone is always welcoming. I felt comfortable within a few minutes of arriving and getting my bearings. There is always a bit of anxiety for me when training, especially when I’m walking into a new place for the first time, but I just have to work through that and with nice people welcoming me, I always do.

Let me say this about the instructor. I know that there is an ongoing and strong debate about who should be able to lead a class. I mean, when I told my homies that the lead was a middle purple belt, I saw some eyebrows immediately go up. If you are confused about why, allow me to explain this to you.

So some people believe that only a black belt level or a minimum brown belt should be able to lead a class. While I do appreciate it when a black belt is around, I mean, let’s be real, there are levels to this! I don’t think it is absolutely necessary. At several schools I’ve trained at and many of the others that I have visited, the black belts often let their higher belts lead many of their classes. At times a black belt instructor was present, but others they were not. In fact, most of my learning has come from purple belts.

I’d argue that at my level, as a 15 year long white belt, there is still much that I could learn from a purple belt. So if I can learn from them, so can you. I think its great to have a black belt present, but it is not a deal breaker for me if there isn’t one. Like I said, even at schools with many black belts, I was primarily coached and taught by their purples.

So the day that I went in we worked on X-guard. Now admittedly, this is not one of my favorite techniques. In fact, in my old school, I avoided the days with the lean, athletic coaches who played BJJ this way. I tried to attend the classes with the coaches who played BJJ that I’m built for. I mean I did mention I’m extremely tight and I’m also not very athletic, oh right, and to add insult to injury I gained like 30 pounds over the pandemic due to vertigo. Yup, it wasn’t even covid, I got freaking vertigo people, vertigo. WTF?

My training partner, a very cool and very big dude named Miguel was really helpful and patient in trying to get my damn legs up towards his hips. We tried all kinds of tricks to make it work for me and I sort of got it, but I’d never play BJJ that way, its extremely awkward and uncomfortable for me. There are different styles of BJJ fighters and I’m not the type to try X-guard. Hell, I don’t think I’ve ever really tried a triangle choke more than once from my back. When on my back, my main focus is usually sweeping and getting back to the top position.

When Coach Antonio said that we were going to start rolling from x-guard position, I thought to myself, I am screwed. Hahah. I got my ass handed to me all night. This position is completely alien to me. I never get caught in it because its not how I fight when I’m on top, and I never use it because I won’t fight that way from the bottom. So I was being violated from both angles.

Never mind that I’m out of practice, out of shape and rehabbing several injuries. This evening, I was a sack of meat being thrown around like nothing. Apologies to my training partners for being so useless.

In any case, there is something to be said for working on your areas of weakness and this is definitely an area of weakness for me. I did what I was told and I did try to perform the techniques, but don’t expect to see me performing x-guard off of my own accord anytime soon. LOL.

The school is in a basement in Forest Hills, it is a no frills hard core feeling type of school.

So they have belts hanging, presumably representing all the dead bodies that dared to challenge them in the ring and mats. They have heavy bags, hard core power lifting equipment, separate locker rooms and pretty much anything you might need to become a certified bad ass.

Kings Combat Fitness is a short 3 train stops away from me and despite only having 2 bjj classes, they also have Muay Thai, Boxing and Strongman classes. I think this combination has the potential to help you lose weight, gain confidence and legit become a real bad ass if that’s your objective.

On the other hand, I didn’t feel pressured in any way by Coach Antonio and he even asked me if I was interested in or okay to spar after our drills. So I think the casual practitioner could be at home here too.

I like Coach Antonio, I like the school and I will be paying the mat fee as time (and my body) permits to drop in on classes. I teach 4 days a week and I can only make one of their BJJ classes a week, so paying to join full time is a waste of money for me. But I’d really love to train there more as the schedule allows and my body heals and gets stronger.

If you’d like to try out any of the programs listed above, contact David at (info @ kingscombatfitness.com) for a free trial. He’s really responsive and seems like a super cool dude. Give it a try, I think you will like it. I’m super excited to continue training with these guys and trying out the other programs too.

I do miss my home at UNA, those guys are phenomenal and I will be reaching out to Professor Fred about mat fees as well. But it is really nice to have a spot that is so much closer to home.