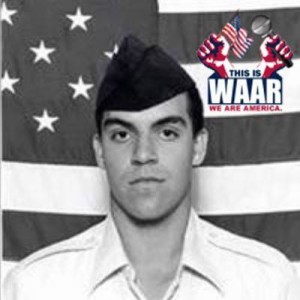 Wouldn’t it be nice if that were truly the case? It would be pretty awesome if every person that put on a uniform was viewed as a soldier, each one equal to the other. Remember that scene from the movie “Full Metal Jacket,” where Gunny says, “I do not discriminate against anyone here! Here, you are all equally worthless.” Well, that would be nice, if it were true.

The problem is that it is not true. Do you have any idea how much racist crap I saw while I was in uniform? Racist things were said directly to me, while wearing my uniform in Texas! The heart of America, the patriotic capital of the U.S, yet they disrespected my nationality and called me racist slurs, while I was in uniform.

Do you think that wearing that uniform makes the hateful ones accept you? Does it make the racists stop calling black people “n*ggers,” or latinos “sp*cs?” It doesn’t! You want to know how I know this? Not only because I saw it, but as I just mentioned, I experienced it myself. The boys down in Wichita, Texas didn’t take too kindly to me visiting one of their establishments. They made it known that I had an invitation to leave before something bad happened to my “Northern, Yankee, Sp*c @ss.” All this occurred, while I was in uniform! Can you believe that?

But they do care when someone takes a knee. How dare they!

Yet, taking a knee during the song is what is offensive to you. That’s offensive to veterans. Well, what about when a veteran does it because of their experiences in uniform, and in the country?

Once again, not only have I read about these things, I witnessed them and was around for some of it. Read up on Staff Sergeant Pedro Tollinchi, convicted of raping a recruit while representing the uniform! This was after he was transferred out of my original recruiting station for sexually harassing my then girlfriend who was also enlisting.

Yet, you insist on pretending, and having us act like we are all equal, like everything is perfect, and this nation or it’s service members can do no wrong! Give me a freaking break!

Yes, men and women who wore the uniform will protest, they will speak up against inequalities and abuses by the nation and those in power. Just because you put on the uniform, it doesn’t change who you are, or how you are viewed by the world. Just because you condemn the wrong doing of some, doesn’t mean you are attacking them all.

I’m a veteran, I love my fellow veterans. But do not fool yourself into thinking that just because I wore that uniform, I stopped being a “sp*c” to some people in this country. Those are the ones that we are protesting against, not you, not the veterans who fought and died for us. We are protesting the people who would see us dead before ever giving us an ounce of respect. We are protesting those people, so stop treating it as though we are attacking you, or others like you. None of this applies to you, unless you are one of those people I mentioned before. Stop twisting the intent, that doesn’t help anyone.

I know I was all over the place on this piece, and I know that each portion could become it’s own blog post.