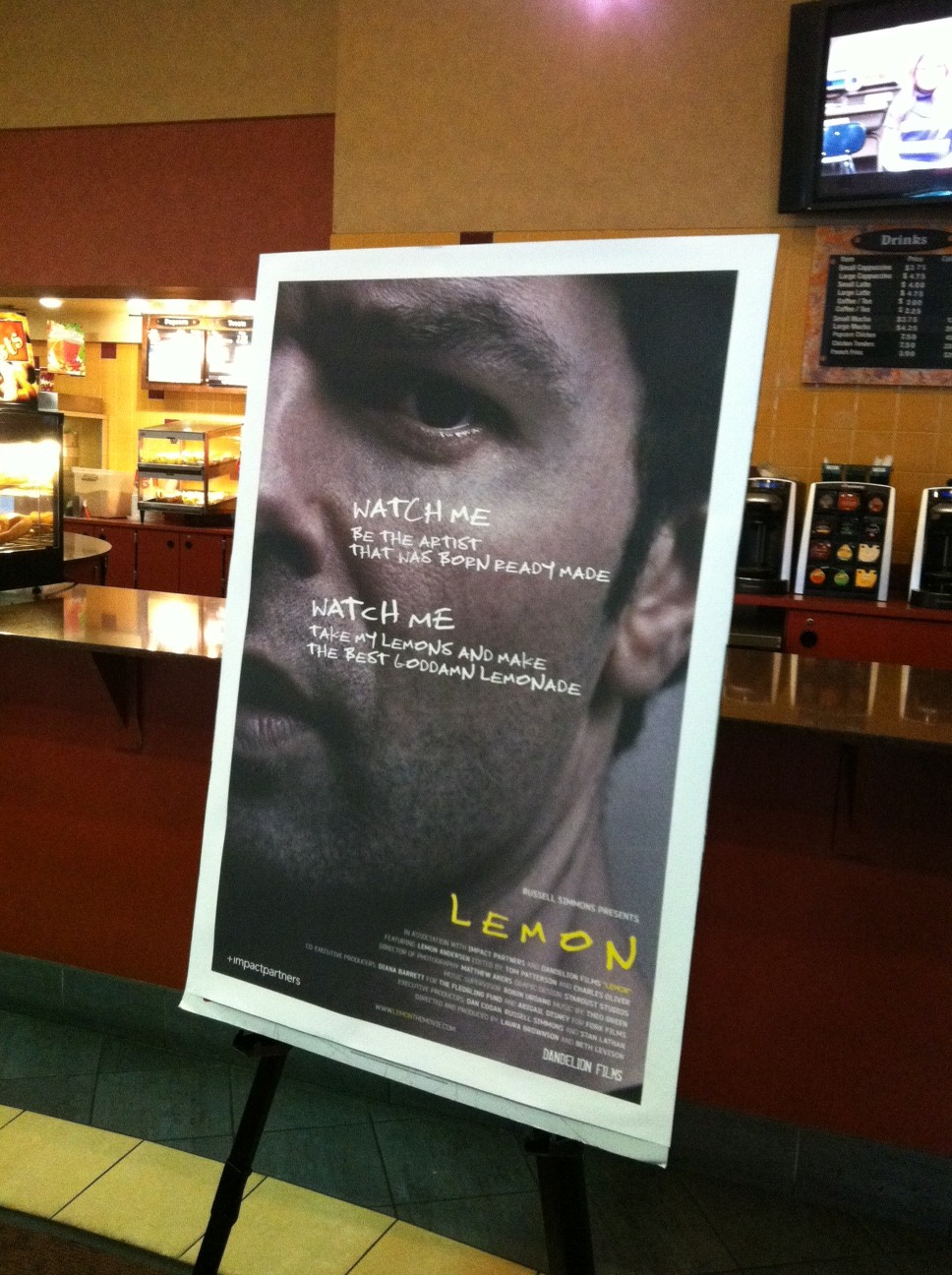 I first encountered Lemon Andersen at a Capicu open mic event. He performed a poetic piece, I remember looking at him and thinking “what does this white dude know about these things he’s talking about.” Of course, I look white, and I’m 100% Puertorican, so who am I to say? I also remember thinking “man this guy is really good. I need to say what’s up to this guy and make a connect so I can keep in touch”.

I’ve been writing forever, far back as I can remember, but I’m a noobie to the performing poetry scene. Guys like Lemon have been at it for years, well known, established, and with a high degree of recognition. So naturally he would be suspect of any stranger approaching him, he was very guarded and cautious when I approached him to say what’s up. Yet at the time, honest to God truth, I had never heard the name Lemon Andersen.

Later, once I realized that Lemon was a known guy after trying to find him to connect online, I though to myself “sh*t, this dude probably thought I was some sort of groupie or wanted something”. I felt I had to clarify why I approached him. I wrote him on facebook letting him know that I wasn’t a “groupie” or after anything from him. It was just that I related to his poem and that’s the only reason I approached him. I think he appreciated my honesty and he then accepted my pending facebook request. He hadn’t done so up to that point.

That is how I met Lemon Andersen.

In any case after seeing one live performance by Lemon I became an instant fan. This guy is a great performer and delivers a real message that I can relate to. That’s why I approached him in the first place. I immediately picked up his book and flew through it, I saw plenty of his performances on Youtube, and tried to find his play. Though it seems “County of Kings” is gone for now.

When I heard a movie was coming out I immediately signed up for news and information and followed the related social media accounts. Once I saw that the movie had finally arrived in NYC, you know I am there to support my new friend! I started tweeting, facebooking, and spreading the word like a beast. When it comes to promoting people that I know, and who I believe in, I’m a beast.

I returned tickets to one of the most anticipated yelp events of the year, “The Summer Stunner”. I am skipping a major queens underground hip hop industry party, all
because my man Lemon trumps everyone else. I’ve been waiting months for this film to come to NYC, I followed them from New Zealand all the way back here, they’ve literally been on a world tour. How could I miss this after waiting so long?

Me and my wife loved the film, it’s an emotional roller coaster, but real. Nothing fake or scripted, just real life. Now to give you some perspective, my wife has never even seen me perform my poetry at an event once, but she’s met Lemon and seen his documentary movie. We saw Lemon after the film, I extended my hand for a handshake, but my man gave me a warm embrace. I embraced him back and afterwards introduced him to my wife. (Lemon, myself, and my wife at the Ajna afterparty)

This film was Laura Brownson and Beth Levison’s labor of love. By the way, we made sure we met tonight at the after party event at Ajna. We’ve been tweeting each other for months and all of us looked forward to actually meeting one another. It was packed in there and we almost gave up, but when we eventually did find them I was greeted with “You are Angel, Twitter and Facebook Angel”, followed by huge hugs and kisses. I think I need to tweet female movie directors more often. Love you ladies!

3 years of footage were used in this film. Starting with Lemon talking about the very beginning of his life and spanning to his stint at “The Public” where he killed it with his smashing performances.

Lemon is the real deal, an intense performer, and a very real individual. This comes across in the film, you get the real Lemon, raw, and uncut. There is so much emotion in this film, and you get to see a side of Lemon that you may not have seen before or otherwise get to see. You get to see his powerful connection to his wife and children. His commitment and pure love for them. It’s a beautiful sight to see.

After the movie, I went over and shook his wife’s hand. I told her “you dear lady are a divine star.” She thanked me and smiled. After watching the film, you can tell without a doubt how important she is to Lemon’s success and his life overall. I remember at one point during the film she wondered about what would happen to them, and as a Lemon friend and supporter, I am so, so so, glad she never gave up on him. I never knew about this aspect of Lemon’s life and it’s pretty freaking amazing and powerful.

The film was extremely revealing. As of this date, Lemon hasn’t watched it yet. He doesn’t want to see it until a later point. He said during the Q&A after the film that to him it’s about getting things done and moving on. He’s just not ready to see this.

I don’t need to convince Lemon fans to watch this movie, any fan will want to watch this. But again, for those that may be new to the Lemon thing, let me give you perspective. Like I said before, my wife is not a fan of spoken word, AT ALL. She wouldn’t have known Lemon if he had on a “County of Kings” shirt and was standing next to Spike Lee. However, she was able to walk into this theater and enjoy AND appreciate Lemon’s story. My point being that even a woman who has never even watched her husband perform poetry once, was able to enjoy this film. It’s not a poets only story, this is a story of real life, man, wife, struggle, miracles, and how life can change for good and bad.

The film was purchased by PBS, and will also be coming out on DVD for purchase. I highly recommend this film, whether or not you personally know Lemon, you will love him by the end of this story.

Stay tuned for details on the PBS airing (rumored for mid October) and the upcoming DVD release. Congratulations to Lemon, Beth, Laura and all the people involved in
the making of this film. Major shout out to Lemon’s wife and children for keeping the faith and allowing Lemon to put his powerful message out to the world. Respect!